Boeing continues to search for new buyers of its CH-47 Chinook tandem-rotor helicopter as it seeks to keep production at its factory near Philadelphia active beyond the end of this decade.

The company is also seeking overseas customers for the Bell Boeing V-22 Osprey, and is pursuing a plan under which the US Navy would use the type as resupply aircraft for its carrier battle groups.

“With the way the US defence budget is, international sales [will] help stabilise the production line and suppliers,” Mark Ballew, Boeing’s director of vertical lift business development, tells Flightglobal.

“Folks around the world are looking at this aircraft,” Ballew adds of the Chinook, which is assembled on the banks of the Delaware River near Philadelphia. “There is nothing else that does what a Chinook does for the [same] cost effectiveness.”

The last Chinooks currently on order, which are part of a second multi-year deal for 155 aircraft, should roll off the production line by the end of 2019. 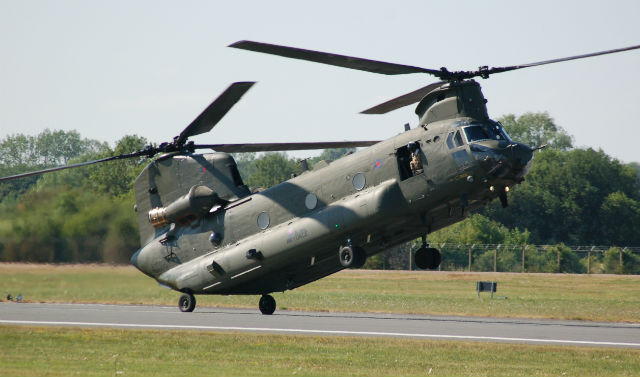 Boeing has already delivered 283 out of the 464 Chinooks covered by both multi-year agreements, says Ballew. The deal also includes options for 60 aircraft for foreign military partner sales.

Other countries that are acquiring or upgrading Chinooks include Australia, Canada, the Netherlands, Turkey, the United Arab Emirates and the UK, Boeing says.

Ballew says the company is now working on securing customers that will take delivery of aircraft in the 2020 to 2021 timeframe.

The latest F-model Chinook now being assembled has a machined airframe that Boeing says eliminates the need for 400 parts and allows the company to stiffen sections of the aircraft. It also has a digital cockpit with a digital advanced flight control system (DAFCS), which can be programmed to bring the aircraft into a hover over specific coordinates, says Ballew. DAFCS also allows pilots to move the aircraft vertically and horizontally during a hover in 1ft (0.3m) increments with the press of a button.

Ballew says Middle Eastern countries have expressed interest in the Chinook, adding that Boeing has conducted flight demonstrations in Dubai and Qatar.

He notes that 20 countries currently operate the CH-47, and that many will likely be return customers.

“Every country that has ever operated the Chinook has come back to get additional airframes or the latest model,” he says. Those customers will likely include the US Army, which Ballew expects will operate Chinooks until the 2060s.

“There is going to be another run down our production line for improvements in mission equipment and performance enhancements,” he says.

Boeing also continues to seek international sales for the V-22, the fuselage of which is assembled at its site near Philadelphia.

Last year the company won a multi-year contract to build 99 V-22s through fiscal year 2019, with final deliveries of those aircraft expected about three years later.

News broke in February that Israel has interest in doubling a planned order for the V-22 from six to 12 aircraft. Boeing says it is also talking to Japan, which has plans to buy 17 V-22s, and the UAE.

The company also continues to push a strategy to sell V-22s to the US Navy as a replacement for its Northrop Grumman C-2A Greyhounds.

Those aircraft perform “carrier onboard delivery” (COD) missions by carrying supplies from shore to aircraft carriers, Ballew says. Supplies are then distributed to other ships in the battle group via helicopter – the vertical onboard delivery (VOD) mission.

Ballew says V-22s could perform the COD missions and many of the VOD missions. He expects the navy will make decisions about replacing or updating its C-2s near the end of the decade.