The US Air Force has sent its newly upgraded E-3G Sentry into harm’s way for the first time on a deployment to Southwest Asia, where it will presumably be supporting the increasingly cluttered air campaign against Islamic State militants in Iraq and Syria.

Nine of an eventual 24 aircraft have received the upgrade through the air force's Oklahoma City Air Logistics Complex, replacing the Senty’s long-outdated 1970s computer technology with an early 2000s standard. The modifications also sets a baseline for future upgrades.

Shifting from the Block 30/35 to Block 40/45 configuration is the most extensive E-3 Airborne Warning and Control System (AWACS) capability improvement in the Cold War platform’s 38-year history, according the air force.

“This is the initial combat deployment for the capability after numerous exercises,” says Gaedecke. “While our tactics, techniques and procedures employing this new capability continue to be refined, exercises like Red Flag allowed crews to gain experience with the system, which included capabilities unavailable with 30/35.” 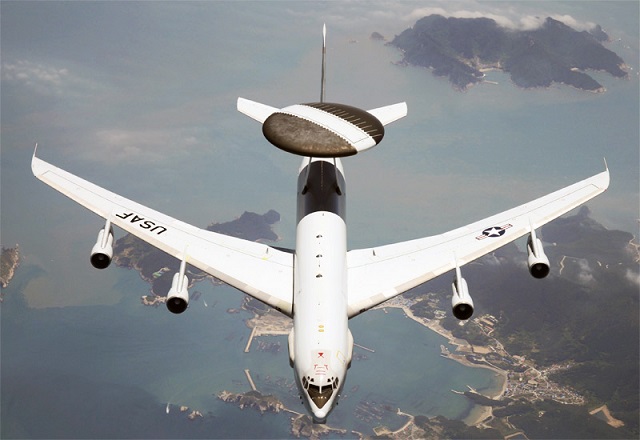 The upgrade comes with a deployable ground system that receives, processes and disseminates data as an extention of the aircraft's airborne surveillance, tracking and command-and-control mission.

The $2.7 billion upgrade entered development under Boeing in 2003 and achieved initial operational capability with five fully equipped E-3Gs this July.
The air force originally intended to upgrade all 31 AWACS aircraft in its inventory, but will instead push to retire seven by fiscal 2019, to avoid the upgrade cost and harvest those 707-320-based aircraft for out-of-production components.

Of the current fleet, 27 are based at Tinker AFB, two are at Kadena Air Base in Japan and two patrol the American and Canadian West Coast from Joint Base Elemendorf-Richardson in Alaska.

The E-3G deploying to the US Central Command area will likely have its hands full, helping coordinate the growing multinational air camapaign against ISIS in the wake of the Paris attacks, and keeping track of Russian aircraft operating unilaterally in Syria.