Boeing announced that it has received a type-design approval from the US Federal Aviation Administration (FAA) for up to 330 minutes of extended operations (ETOPS) for the 777 aircraft.

The authorisation allows existing 777 customers using General Electric engines on 777-200ER, -200LR, -300ER and 777 freighter models to fly up to 330 minutes from an alternate airport, said Boeing. FAA approval for Rolls-Royce and Pratt & Whitney engines on 777-200ER models is expected "over the next few months". 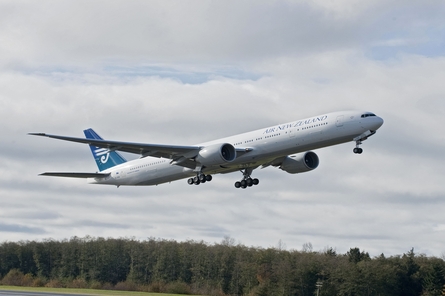 Air New Zealand is the first airline to purchase the 330-minute ETOPS option. "This means the airplane is able to fly a straighter route between the city pairs and that's good for the environment," said Capt David Morgan, Air New Zealand's chief pilot.

The new FAA approval allows "airlines that operate routes in the south Pacific, over the North Pole, and from Australia to South America and southern Africa to fly the most direct routes", added Boeing.