Last year, generally showed some improvement over 2017 in business aviation safety, although the number of business jet fatalities – at 25 – was slightly up on the previous year, when 22 passengers and crew died. Nevertheless, 2018 results for both business jets and turboprops have generally come in on or slightly better than the long-term trend.

The business jet fatal accident rate in 2018, at 0.03 per 100 aircraft in operation, was the same as that in 2017. However, in the long term, the fatal accident rate for this class of aircraft has been halving about every 12 years. The fatality rate for the class in 2018 was 0.09 per 1,000 seats, which is slightly above the long-term trend.

The worst accidents in 2018 included:

1) Challenger 604 (TC-TRB) crashed near Shahre Kord, Iran while en route from Sharjah to Istanbul on 11 March, killing the three crew and eight passengers on board.

2) King Air C90B (VT-UPZ) crashed on approach to Juhu Airport, Mumbai, India on 28 June. The two crew and two passengers on board and one person on the ground were killed.

3) Piper PA31T (N555PM) disappeared on a flight from Andrews, South Carolina to Governors Harbour, Bahamas on 24 October and is believed to have crashed into the Atlantic Ocean some 100 miles southeast of Charleston, South Carolina, killing the pilot and four passengers on board.

4) Citation M2 (PP-OEG) crashed on landing at Fazenda Santa Terezinha, Jequitai, in Brazil on 26 November, killing the two crew and two passengers on board.

5) Citation V (N188CW) crashed shortly after take-off from Fulton County Airport, Atlanta, Georgia on 12 December, killing the pilot and three passengers on board. 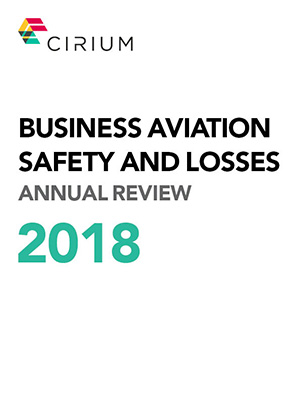