Bombardier and Triumph Aerostructures (TAS) have reached a settlement that resolves all outstanding commercial disputes and pending litigation related to the design, manufacture and supply of wing components for the in-development Global 7000.

In a statement issued on 24 May, TAS parent company Triumph says the agreement “resets" the commercial relationship between the two companies, "and allows each of them to better achieve their business objectives going forward”. Terms of the settlement have not been disclosed.

Bombardier launched a costly redesign of the Global 7000 wing in 2015 – around four years after the programme's launch – to reduce the structural weight of the ultra-long-range twin without altering its aerodynamic profile. The company blamed the wing redesign for a two-year delay to its flagship aircraft's entry into service, which is now pegged for the second half of 2018. 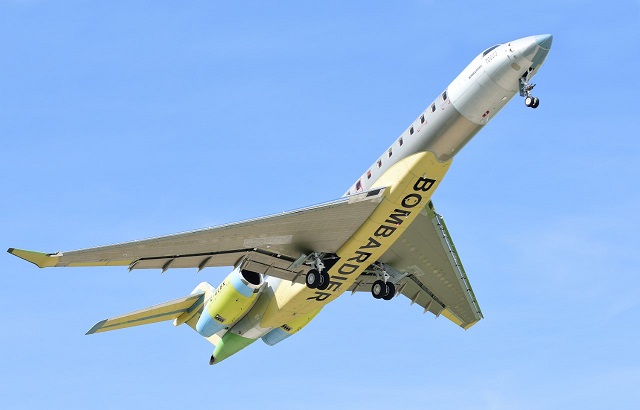 The design change eventually triggered a legal dispute with TAS, which filed a lawsuit in early January claiming that Bombardier owed the company money for the extra work and tooling costs associated with the activity.

Bombardier dismissed the claims as “without merit”, but despite their disagreements, the companies have continued to work closely on the programme. A Global 7000 prototype with the lighter wing is scheduled to join the flight test campaign in the third quarter, Bombardier says.

Daniel Crowley, Triumph president and chief executive, describes the settlement as “mutually beneficial”. He says TAS “remains committed to the Global 7000’s continued success as the aircraft transitions from flight testing to entry into service”.

To date, three test articles have flown around a combined 250h from Bombardier’s US flight-test centre in Wichita, Kansas.

The 7,400nm (13,700km)-range Global 7000 will be the largest and longest-range business jet in the airframer’s seven-strong line-up. It is designed to challenge Gulfstream’s five-year dominance at the top end of the traditional business jet market, fitting neatly between the 7,000nm range of the G650 and the 7,500nm reach of the G650ER.