Colorado-based Boom Technology has unveiled the XB-1 supersonic demonstrator that will be used to refine the aerodynamics and propulsion for a Mach 2.2, 40-seat airliner and private jet planned to enter service in the early 2020s.

Several concepts for supersonic business jets have appeared since the retirement of the BAC/Aerospatiale Concorde fleet in 2003, but none have yet moved past the drawing board stage. Meanwhile, new regulations restricting take-off noise emissions take effect in 2017, making it even harder for a jet engine capable of supersonic speed to be successful.

The revealing of the two-seat XB-1 inside a hangar at Denver’s Centennial airport shows the level of the start-up’s ambition. The company already has attracted two commitments for a combined 25 aircraft worth more than $2 billion from Richard Branson’s Virgin Group and an unnamed European airline. The company founded less than two years ago is now in advanced development of a flying demonstrator with registration N220XB, denoting the aircraft’s Mach 2.2 speed goal.

For several years, Airbus partner Aerion has struggled to find an engine-airframe pairing that will meet new Section 14 take-off noise regulations adopted by ICAO for the AS2 business jet. Aerion’s solution has been to submit a type certificate application in 2017 to allow the aircraft to operate under less restrictive, Chapter 4 noise rules. The Section 14 rules take effect for aircraft weighing over 54,400kg (120,000lb) in 2017.

Boom executives, however, are confident they have a plan to comply with Section 14, despite proposing an even larger aircraft with enough to thrust to travel nearly 40% faster than the AS2.

“Medium bypass engines and throttle back at takeoff get you to Chapter 14 compliance,” Boom chief executive and founder Blake Scholl, a former Amazon executive. 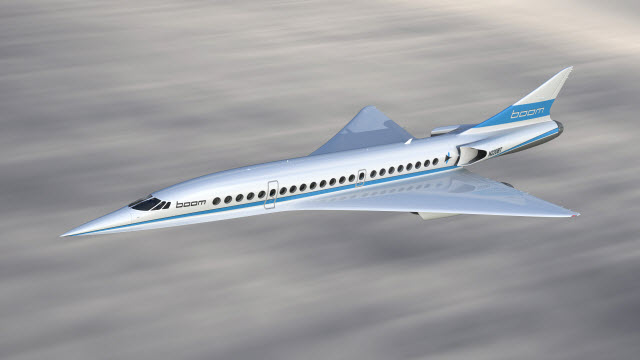 Boom Technology supports a lifting of the US government’s ban on supersonic flight overland. But the company says the full-scale aircraft can find a market for supersonic travel even with the band. More than 500 routes mainly over water are still attractive for supersonic jets, including New York to London and San Francisco to Paris, according to Boom.ters/apprentice_ver3_xlg.jpg