The Japan Air Self-Defence Force (JASDF) has taken delivery of the first two Cessna Citation Latitudes from a September 2017 order for three of the midsize business jets.

The pair are the first Latitudes to be configured for flight-inspection missions. The final example is scheduled to arrive early in 2021. 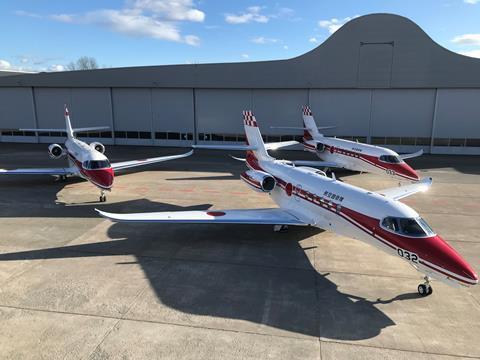 The JASDF’s Flight Check Squadron - based at Iruma air base north of Tokyo - will operate the aircraft, with missions to include monitoring the accuracy of instrument approaches at Japan’s airports.

Cirium fleets data records an in-service fleet of 238 Latitudes since the 2,700nm (5,000km)-range type entered service in August 2015. For the past four years, the Pratt & Whitney Canada PW306D-powered aircraft has been the most-delivered business jet in the midsize category, with output in 2019 totalling 58 aircraft.