Comlux Completion has delivered its first outfitted Airbus ACJ320neo to an undisclosed customer, with the handover coming 17 months after the green CFM International Leap-1A-powered VIP airliner arrived at its facility in Indianapolis.

Work is underway on two more ACJ320neo completions, says the MRO provider and sister company of Swiss charter and management firm Comlux Aviation, with these examples scheduled for delivery in the first half of 2021 and the third quarter of 2022. 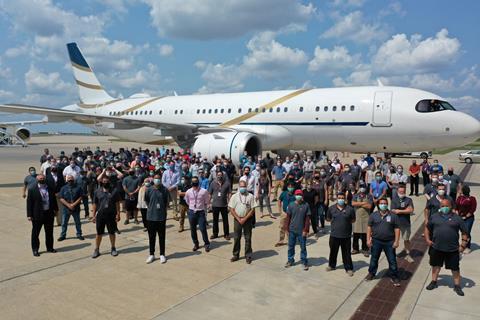 “A fourth ACJ320neo will arrive in Indianapolis in April 2021 to start its VIP cabin completion process,” says Comlux.

The company describes the interior of its first ACJ320neo as “extremely detailed and sophisticated…providing a cosy yet elegant atmosphere through a succession of private rooms”.

The rear of the aircraft “offers lots of space and comfort for executive guests and their entourage when flying long range trips”, it adds, while high-speed Ka-band inflight connection allows for data transfer speeds of 50Mbps throughout the cabin.

”Despite the challenging situation we have been facing during the last six months because of Covid-19, our teams remained more than ever motivated and focused on delivering exceptional quality performance on our first ACJ320neo completion,” says Comlux Completion chief executive Daron Dryer.

“With two more aircraft of the type in outfitting process right now, and more to come soon, Comlux is becoming completion centre of reference for the ACJneo family aircraft,” he adds.

Airbus has secured 14 sales for the re-engined airliner to date [five ACJ319neos and nine ACJ320neos], of which seven have been delivered green.

The first customer for the ACJ320neo was UK luxury charter company Acropolis Aviation which took delivery of its outfitted aircraft in February from Swiss completions centre AMAC Aerospace.

German charter and management company K5 Aviation was announced as debut customer for the smaller and longer-range ACJ319neo in 2016. The aircraft was delivered to Dutch maintenance, repair and overhaul firm Fokker Techniek for outfitting in July 2019 and is scheduled for redelivery later this year.

Key features of the Neo platform are its wingtip-mounted sharklets, and quieter, more efficient engines – a choice between the Leap-1A (the most popular option) or Pratt & Whitney’s PW1100G.