Worldwide shipments of fixed-wing business and general aviation aircraft fell in the first quarter of 2020 to their lowest level for a decade, with the sector’s poor performance almost entirely due to the coronavirus outbreak.

Despite a strong start to the year, the pandemic has curtailed manufacturing, stifled global sales, and stalled deliveries, as a result of restrictive regulations and travel bans.

Data from the General Aviation Manufacturers Association (GAMA), released on 27 May, shows that deliveries of business aircraft - jet-, turboprop- and piston-engined types - totalled 404 units for the three months ended 31 March. This marks a 21% decline on the same period a year earlier, and the weakest first-quarter output for the fixed-wing sector since 2010, when only 390 aircraft were shipped. The value of deliveries slid by $900 million, to $3.4 billion, according to GAMA.

“While the year started off strong for the industry, health and safety restrictions, put in place to respond to the Covid-19 pandemic, began to significantly impact global operations, supply chains and deliveries towards the end of the first quarter,” says GAMA president Pete Bunce.

There were deliveries of 114 business jets during the period - 27 fewer than in the first three months of 2019 and the sector’s lowest first-quarter performance since 2004 - with a fall in shipments seen across each aircraft class.

Light-jet deliveries plunged by nearly a fifth, from 63 to 52 aircraft. Cessna, the largest player in this segment with four models, was the weakest performer: shipments of the M2, CJ3, CJ4 and XLS+ dropped from 27 units in the first quarter of 2019, to 12 in 2020.

Rival Embraer recorded just five deliveries of its Phenom 300E, compared with six examples of the high-performance twin in the same period last, plus a pair of 100EVs. Embraer hopes the arrival in the current quarter of a revamped version of the 300E, featuring cockpit and performance enhancements, will boost its appeal. 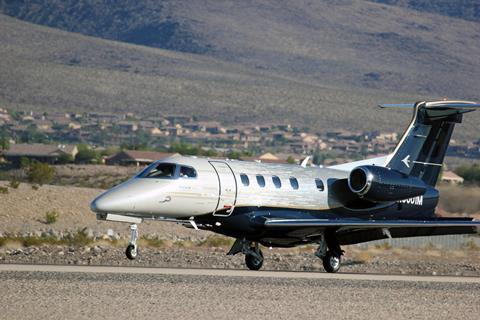 Cirrus was the strongest performer in the light-jet segment, shipping 18 SF50 Vision Jets – four more than in the same period of 2019. The airframer – developer of the SR family of piston singles – has orders for around 450 SF50s, and hopes to deliver up to 100 units to customers this year. From the end of the second quarter these will include the first G2s equipped the Garmin’s new Autoland automatic landing system.

Similarly, Pilatus says demand for its short take-off and landing PC-24 remains “as strong as ever”, despite the uncertainty created by the coronavirus crisis; first-quarter shipments of the superlight jet climbed from five to seven units.

Bombardier recorded a single-unit delivery hike, to three, for the Learjet 75. Continued weak demand for the high-end twin persuaded the Canadian airframer last year to revamp, reposition and rebrand its entry-level product in an effort to boost sales. The newly named Liberty 75 is scheduled for certification and service entry in the second half of the year.

Bombardier will be hoping the Liberty will eventually emulate the success of the Challenger 350, which has been top-selling super-midsize business jet for the last six years. Shipments of the 350, rose to 11 from 10 in the year-ago period, also making the jet the most delivered aircraft across the entire midsize sector. However, overall performance for the segment was weak during the period, with the data showing 29 deliveries - down from 36 during the first three months of 2019.

Gulfstream’s G280 was the worst performer, with coronavirus-imposed travel restrictions resulting in shipments falling during the period by four, to three units. The constrained travel environment also contributed to a 50% fall in Citation Latitude deliveries, to seven aircraft. Cessna expects its new flagship Longitude to account for the bulk of its midsize deliveries going forward. The super-midsize jet entered service last October and over 20 examples have been delivered to date – including two aircraft during the first quarter.

Like the Longitude, Embraer’s midsize newcomers, the Praetor 500 and 600, also made their GAMA first-quarter report debuts, with shipments of one and three aircraft, respectively.

Deliveries at the top-end of the business jet market meanwhile, fell by 21% in the period, from 42 to 33 aircraft. The data does not include shipments of Dassault Falcon business jets, as the French airframer releases its deliveries figures at six-month intervals. However, Cirium fleets data records eight deliveries for the French airframer during the period - two for the flagship 8X, four 7Xs and one large-cabin 900LX - against six shipments in the first quarter of 2019.

Bombardier’s large-cabin deliveries were flat for the first quarter at 12 aircraft - including six of its flagship Global 7500. Despite market conditions, the company says it will ramp-up production of the ultra-long-range jet after mid-year, but will deliver “a few less” than the 40 examples previously planned for 2020.

Similarly, production of its newest Global family members, the 5500 and 6500, will also increase over the coming months, but output will be lower than originally planned. The pair were launched in May 2018 as longer-range versions of the Global 5000 and 6000, featuring all-new Rolls-Royce Pearl 15 engines, revamped interiors and new wings. The Global 6500 entered service in October, while deliveries of the 5500 are expected to begin in the second half of the year. 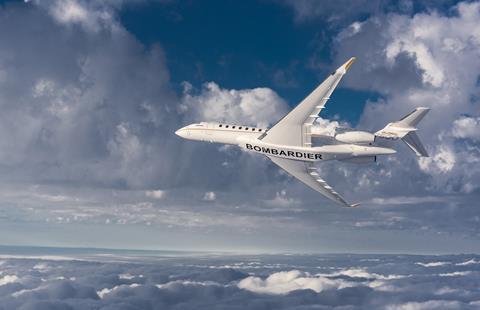 Gulfstream manufactured and completed 27 G500, G550, G600, G650/ER business jets in the first quarter - matching last year’s output - but travel constraints resulted in it delivering only 20 of its large-cabin, long-range aircraft family. While demand for its high-end programmes remains robust, Gulfstream says the impact of the pandemic on its sales efforts and supply chain have forced it to revise downwards its delivery guidance for the year, from 150 to 130 aircraft.

Turboprop deliveries fell by 42% during the first quarter, from 122 to 71 units. Output dropped across the sector; Piper’s M600 was the only model to buck the trend, with three aircraft shipped during the period.

The Epic E1000 high-speed turboprop makes its report debut following delivery of the first example in February. The US company plans to ship up to 10 of the high-speed singles this year.

Shipments of piston-engined aircraft slipped by 12% in the first quarter, from 248 to 219 units. With the exception of Cessna, which recorded an 18-unit rise in deliveries of its CE-series, to 54 aircraft, all the airfrmers saw delivery outputs flat or down.

Tecnam’s P2012 Traveller also makes its first-quarter report debut, with five aircraft delivered during the period. The Italian airframer has shipped 14 of the piston-twins since the first example was handed over in June 2019.