Austria's Diamond Aircraft flew its retractable landing gear-equipped DA50 for the first time on 28 October, and says the new Continental CD-300-powered high-end piston-single remains on track to secure European certification and enter service in the third quarter of 2020.

Austria's Diamond Aircraft flew its retractable landing gear-equipped DA50 for the first time on 28 October, and says the new Continental CD-300-powered piston-single remains on track to secure European certification and enter service in the third quarter of 2020.

Test pilot Soren Pedersen says the five-seat DA50 showed “good agility” during the sortie with all systems “working as expected”. 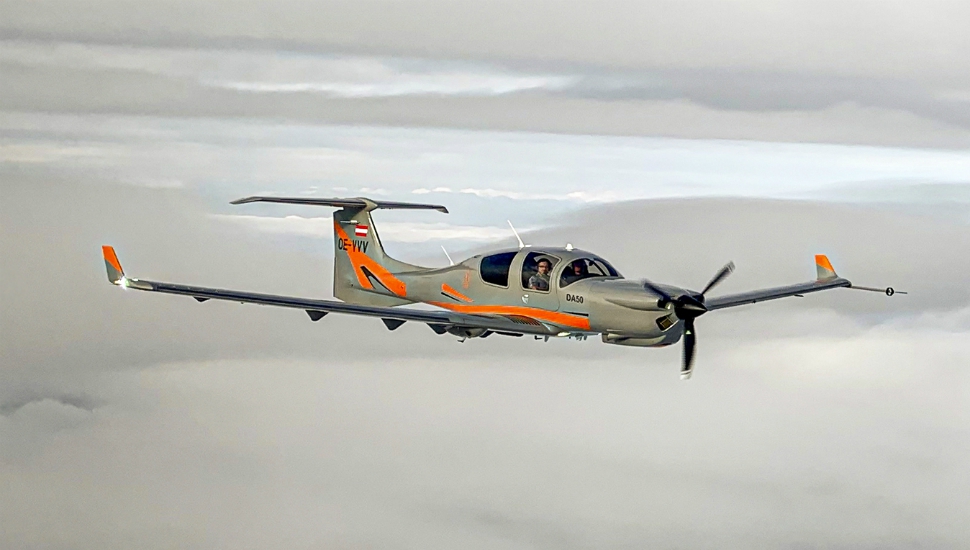 "Since all new elements are already well known from other aircraft out of the Diamond aircraft family, the DA50 made a very mature impression from the first lift-off,” says Pedersen.

Launched in April 2017, the high-end DA50 was originally offered as a fixed-gear aircraft powered by a Safran/SMA diesel engine. Diamond’s acquisition in December that year by China’s Wanfeng Aviation led to a programme revamp, as part of a wider restructuring effort by the new owner.

A DA50 powered by the Jet A1-fuelled-CD-300 made its maiden sortie in March, and Diamond says it will provide performance data for the platform later this year.

“We have received a lot of interest in the DA50,” the airframer says, “but we don’t plan to open the orderbook until the Aero [Friedrichshafen] show [in Germany] next April, where we will also announce the price.”

The Wiener Neustadt-headquartered airframer says the DA50 is “ideal” for owner-pilots “needing more seats and space” because of its "extra-large luxurious cabin and excellent payload". It is also targeting charter operators looking for a “low-cost alternative” to other small piston-engined aircraft and turbine-powered types.

As well as the DA50, Diamond manufactures four aircraft families – the DA20 and DA40 piston-singles, and the DA42 and DA62 piston-twins, which are also sold in a range of special-mission or multipurpose guises known as MPP.

Diamond is also developing an aerobatic turboprop trainer called the Dart 550, which it is aiming to secure European certification for in the first quarter of 2021.

The company delivered 140 aircraft in 2018 and says it is “well on track” to ship 250 units this year. “Expect a strong third and fourth quarter from us,” says Diamond.