Dornier Seawings has secured a €150 million ($172 million) investment from its Chinese shareholders, which will be used to accelerate development and production of the new-generation Seastar amphibian, the CD2.

The joint venture is now preparing the first of two prototypes for its maiden sortie in the middle of 2019 and hopes to secure certification for the 12-seat aircraft in 2020. Service entry is planned for 2021.

Dornier Seawings says the funding will also finance the construction of a new manufacturing facility at its headquarters in Wuxi, near Shanghai, and will be used to expand its final assembly line in Oberpfaffenhofen, Germany. This base is also home to its flight-test centre, research and development effort and composite manufacturing facility.

The CD2 launched in February 2016 and rolled out the first example of the Pratt & Whitney Canada PT6A-135A-powered twin on 18 August 2017. This milestone was reached more than 26 years after the original programme was mothballed because of financial problems – despite securing US and European certification for the Seastar in 1991. No aircraft were ever delivered. 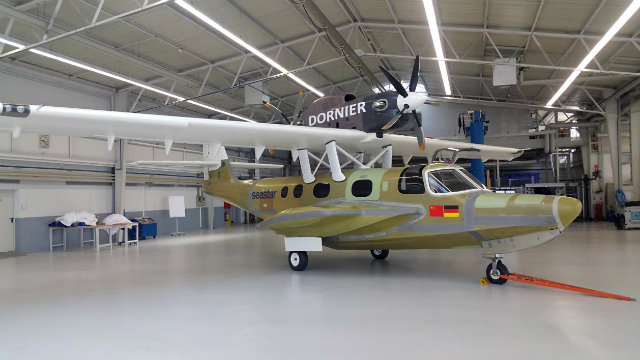 The programme was acquired in 2013 by Chinese companies Wuxi Communications Industry and Wuxi Industrial Development, although the Dornier family retains a minority stake.

The new-generation aircraft boasts a number of improvements over the original version. These include a redesigned and upgraded interior, a Honeywell Primus Epic 2.0 avionics suite, a stern hydro-thruster for improved water manoeuvring, new corrosion-resistant landing gear supplied by Sumitomo of Japan, a hydraulic and steerable nose gear, and five-bladed composite propellers designed by MT.

The 900nm (1,670km)-range CD2 is designed for a host of operations, notably VIP and scheduled charter, special missions, border and fisheries patrol as well search and rescue. Key markets for the CD2 are Asia, Europe and North America, with the former eventually expected to account for 40% of sales, says Dornier.