Diamond Aircraft is displaying a quartet of Dubai debutantes, with its Dart-450, DA50-V and standard and surveillance-roled DA62s all attracting significant interest.

The Dart 450 single-engined turboprops on display in the company's static exhibit are the first of two examples built so far, with chief executive Christian Dries expecting a third to make its debut flight before the end of the year. The lead pair are powered by the Ivchenko-Progress/Motor Sich AI-450S engine while the latest aircraft will use a GE Aviation engine with a 550hp (410kW) output.

The Austrian airframer will deliver its first Dart 450 to an undisclosed buyer shortly in a non-certificated kit version, and plans to hand over the first fully certificated aircraft in 2018. 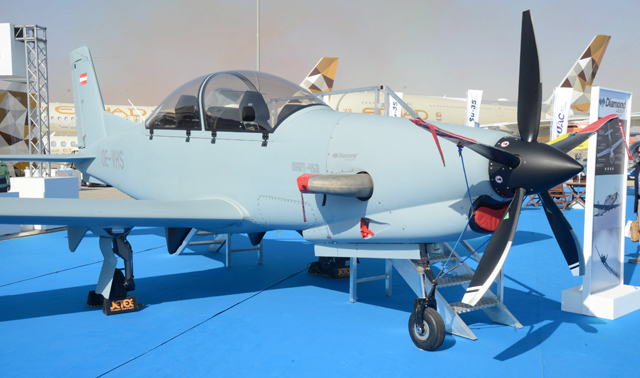 The tandem-seat aircraft is developed as a civilian and military trainer, and with an endurance of up to 8.5h, Dries also sees a role for the Dart 450 in the surveillance and reconnaissance markets. “We have had so much interest in this product,” he says. “We expect it to be Diamond’s most successful model ever.”

Production of about 50 aircraft a year is planned at the airframer’s Weiner Neustadt facility.

Fellow Dubai debutante the DA50-V is also making huge strides towards certification. The five-seat single is the first of a family of light aircraft, based on the DA50 platform and powered by Safran/SMA diesel engines. The line-up will also include the four-seat DA50-IV and seven-seat DA50-VII. The latter will be available with a 375shp Lycoming petrol engine and in a turboprop version – powered by an AI-450S.

The DA50-V made its maiden sortie in April and is scheduled for validation and service entry next year. “We expect the entire DA50 family to be in service by early 2020,” says Dries.

Diamond is also for the first time showing its DA62 piston-twin and its multi-mission stablemate the MPP. This platform is being pitched for tasks including border patrol, search and rescue and infrastructure monitoring. With a maximum take-off weight of about 2.3t, the twin-engined, four-seat type can remain airborne for up to 10h. Also on display is the DA42-IV piston-twin.