The European Business Aviation Association (EBAA) is calling on the continent’s governments and legislators to support the sector throughout the coronavirus crisis, as the pandemic forces the grounding of many aircraft and risks the future of a host of firms.

In a statement released on 18 March, the EBAA says it “respects” the decision by European authorities to temporarily restrict non-essential travel in the interest of public health. However the European Commission, the EU member states (including the UK until 31 December) and Switzerland must consider “all recovery and relief measures available to ensure business continuity for operators, airports and others in the business aviation industry”, it says. 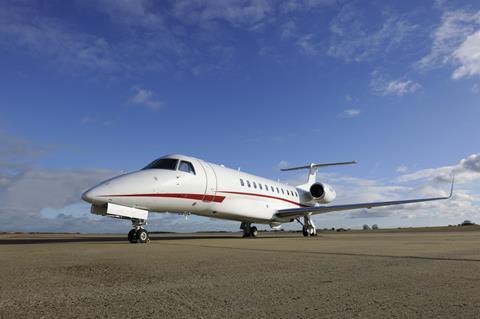 “The rapid spread of COVID-19, along with government and business-imposed travel restrictions, are having a devastating impact on the commercial aviation industry and the business aviation sector alike,” says the EBAA.

It describes the sector as “a significant contributor to the European economy, connecting three times more destinations than scheduled airlines, generating nearly €90 billion [$99 billion], and employing over 370,000 people”.

Medical flights, the EBAA argues, are the one area of the business aviation sector that should be exempt from any restrictions during this crisis, “as they help save lives”.

“On average European business aviation operates no less than 70 medical flights per day,” says the association.

Athar Husain Khan, secretary general of the Brussels-headquartered body says while it is still too early to fully evaluate the impact of the crisis on the sector, EBAA is receiving reports of operators’ aircraft grounded, airport closures and staff being put on leave across Europe.

“Business aviation calls on the European Commission, the Member States and Switzerland to consider all recovery and relief measures available to safeguard our members’ operational and business continuity,” says Khan. “It is critical to allow business aviation operators to return to normal operations as soon as possible so they can support the recovery of the wider economy.”

Meanwhile, In response to the crisis, Europe’s largest aircraft operator Luxaviation has launched a venture to support the struggling operator community.

The European Business Aviation Solidarity Initiative (EBASI) is designed says Luxaviation to put its administrative, financial and procurement resources “at the service of smaller operators and fellow contenders” for the next three months.

Participating companies can enjoy, the same pricing that Luxaviation gets from suppliers and can  take advantage of the company’s payment terms, it says.

“This initiative allows [operators] to focus their limited resources on keeping their clients and assets safe, which is paramount to keep the industry as healthy as possible,” says Luxaviation.

.The Luxembourg-based operator, which has a worldwide fleet of around 200 aircraft, is considering rolling-out the EBASI across its network.