UK charter airline Titan Airways has become the first operator to land an Airbus airliner on the island of St Helena in the South Atlantic, following the arrival on 20 April of an A318.

The narrowbody (G-EUNB) was chartered by the UK government to carry to carry medical staff and 2.5t of “essential medical supplies” for the residents of its overseas territory, says Titan. 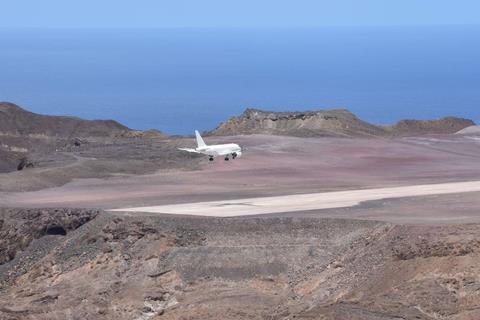 It departed Titan’s base at London Stansted airport and flew to St Helena via Accra, Ghana, and Ascension Island.

Titan acquired the ex-British Airways A318 in 2017, and set about installing a crew rest area “to extend flight-duty periods to enable long-haul operations”.

Titan is also scheduled to take delivery of four new airliners later this year – two A321LRs and a pair of A321P2Fs, becoming the first operator of the converted freighter in the northern hemisphere, it says.