Airbus has conducted the first flight of a business jet variant of its A220-100, which the airframer has branded as the ACJ TwoTwenty.

The aircraft, MSN50062, took off from Montreal’s Mirabel airport on 14 December with two test pilots and a flight-test engineer on board.

Airbus is intending to deliver the Pratt & Whitney PW1500G-powered aircraft to corporate jet operator Comlux over the next few weeks.

It will then be fitted with a VIP cabin at the customer’s facility in Indianapolis.

Comlux has an exclusive agreement with Airbus to outfit the first 15 aircraft from the ACJ TwoTwenty line.

Unveiled in October last year, the aircraft will have a 5,650nm range and offer six living areas inside the cabin. 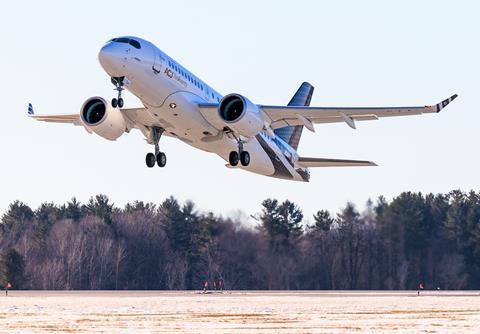