Gama Aviation – one of the largest business aviation services providers in the world – has its eyes set on rapid expansion in the maintenance sector, and sees the recent opening of a new flagship facility in Bournemouth, UK as crucial to achieving that ambition.

Formally unveiled on 16 May, the 12,540sq m (135,000sq ft) base at Bournemouth International airport, in southern England, is integrated into Gama's current MRO network, which includes a further 29 facilities worldwide.

"It's another piece of a global network that we are building, such that our clients and third parties have maintenance coverage where and when they require it," says Gama chief marketing officer Duncan Daines. 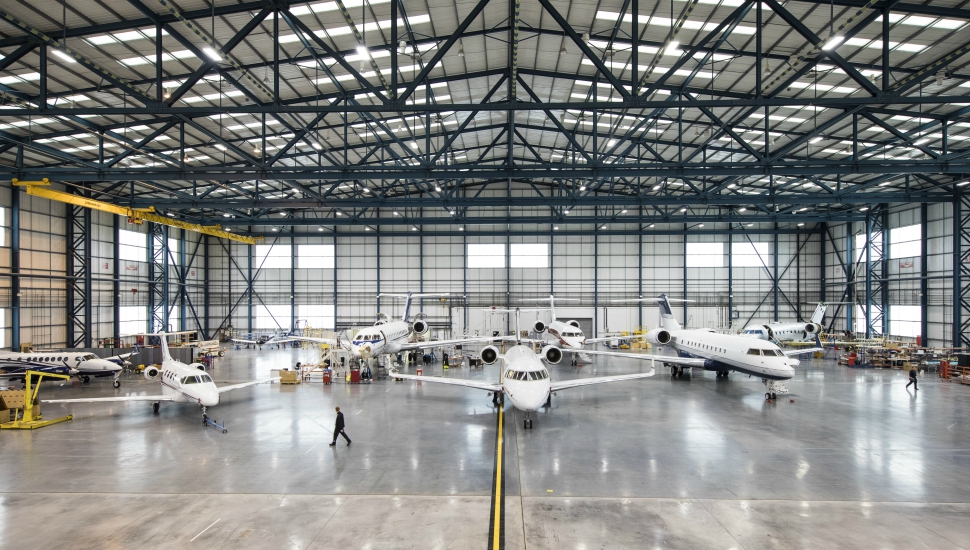 Established on a 25-year lease with airport owner Rigby Group, the Bournemouth site merges Gama's MRO operations in Farnborough – home to the company's global headquarters – and at Oxford airport. Scott McVicar, managing director for the company's ground services division in Europe says the previous set-up was "too fragmented".

"With business jet MRO in Oxford and turboprop support in Farnborough, it just didn't reflect the quality operation that our high-end clients have come to expect from us," he says.

"Reorganising the support offering under one roof – and a much larger one at that – is also so much more efficient and gives us room to expand."

Gama spent some time searching for a suitable location for its principal MRO operation. The Bournemouth facility "was a perfect size and fit", says McVicar, who points out that with other aerospace operations on the same site, such as Cobham Aviation Services, Jetworks, Signature Technicair and Thurston Aviation, there is already an established skills base in the local area.

Another key attraction is the airport's 2,200m (7,200ft)-long runway, which can accommodate "all aircraft types and sizes", says McVicar.

Gama puts the total cost of the consolidation and revamp of the Bournemouth site at £1.2 million ($1.5 million), but this outlay is dwarfed by recent awards, from undisclosed customers, of £90 million-worth of long-term support contracts for special-mission aircraft.

The move to the new site has also enabled Gama to enter the airline MRO sector for the first time, with initial deals from British Airways and TUI. "We have a flexible arrangement to provide space in Bournemouth for when these carriers need the extra capacity to maintain or repair their airliners," says McVicar.

Gama is keen to expand that commercial offering and build on its existing business jet and turboprop MRO support operation.

MRO is provided for the Beechcraft King Air-series and its Premier 1/1A sibling; Bombardier's Challenger 600 series, 850 and Global family; the Cessna Citation XLS and Mustang; Embraer Legacy 600; Hawker 800 series, and Rockwell Aero Commander.

McVicar says Gama may eventually expand its portfolio, "but our focus for the time being is to build our core business, which keeps us very busy".

Gama offers a broad range of MRO services, including base and line maintenance, aircraft-on-ground support, component overhaul, bespoke design and installation for special-mission and VIP aircraft.

"We are particularly busy at the moment performing ADS-B [automatic dependent surveillance – broadcast] out upgrades, with owners and operators coming to us in increasing numbers as Europe's June 2020 compliance deadline approaches," says McVicar.

Despite its sister division, Gama Air, being one of the largest business aircraft operators in the world, there is no favouritism when it comes to selecting an MRO provider.

"We act as separate companies and have to bid for the contracts just like everyone else," says McVicar. "Sometimes we lose out to other companies. That's the nature of this business."