Asia-Pacific is emerging as a key testbed and market for the new segment of urban air mobility (UAM), with developers eyeing governments and customers in the region as likely early adopters of electric vertical take-off and landing (eVTOL) technology. 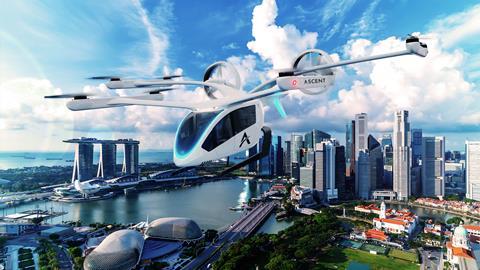 Part of the reason is that the area is home to some of the globe’s most gridlocked cities. A 2020 study by management consultancy Roland Berger forecasts more than 160,000 small, remotely-piloted passenger aircraft will be in service in congested metropolitan areas around the world by 2050. By then, it predicts 70% of humans will live within these conurbations – from 50% today – with population growth expected to outstrip ground transportation capacity by over a third.

Like many burgeoning, technology-led sectors, UAM looks like one ripe for consolidation. Roland Berger estimates that more than 100 eVTOL projects are in various stages of development. They include those owned or backed by Airbus, Boeing and Embraer as well as countless independent start-ups. While several prototypes have been test flown – including in urban environments – none are anywhere near being approved for trial operations, let alone to carry paying passengers.

However, when that moment comes, several countries in Asia-Pacific could be at the front of the queue to offer UAM air taxi services.

China’s EHang is close to securing type certification for its EH216 UAM platform in its home market, and has completed over 20,000 flights with the two-seat eVTOL aircraft in 10 other countries where it is seeking approval, including Japan and Indonesia. 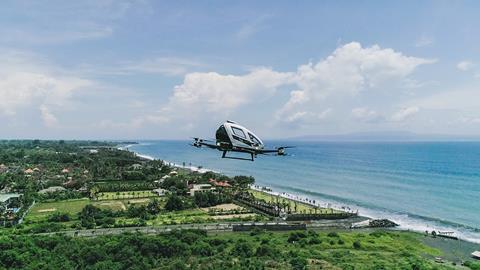 EHang has conducted flight tests in China and 10 other countries

As part of its effort to commercialise the 19nm (35km)-range EH216, the Guangzhou-headquartered company has created a scheme – the 100 Air Mobility Routes Initiative – which is focused on developing a template for an air mobility operating system, including route planning, flight operations, safety management, regulatory compliance, and sales and marketing functions.

EHang is also creating a digital platform that will be open to multiple users. Around 50 stakeholders are contributing to this initiative, it says, including prospective operators such as Hainan Airlines, Hong Kong Airlines, HK Express, and highways group Shenzhen Expressway. Around 3,000 flights have been conducted so far, including in the cities of Guangzhou, Shenzhen and Zhaoqing.

In addition, EHang is developing the VT-30, a larger, longer-range version of the EH216, which is designed for journeys up to 160nm with 100min endurance. A certification and service entry timeframe has not been disclosed, but EHang says it has secured the first order for the two-seat model from Japan’s Okayama Kurashiki Mizushima Aero & Space Industry Cluster Study Group (MASC).

The pair are currently exploring use cases for the EH216 in Japan have conducted a series of demonstration flights during the last six months in Fukushima and Okayama.

Germany’s Volocopter is aiming for type certification and service entry of its similar-sized VoloCity eVTOL aircraft “within the next two to three years”, and says Singapore – home to its Asia Pacific headquarters – will be one of the first cities to launch commercial services with the two-seat, 19nm-range type. 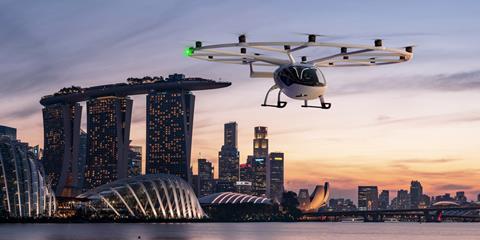 It follows a successful public demonstration in October 2019 of its 2X prototype – a precursor to the VoloCity – in the city’s Marina Bay district, along with the first full-scale air taxi “vertiport”, operated and assembled by its UK partner Skyports.

Volocopter says is has been “working closely with key stakeholders” – including the country’s Ministry of Transport, Civil Aviation Authority and Economic Development Board – “to promote urban air mobility in Singapore”.

The Bruschal-headquartered firm expects the first service to be a tourist route over the south coast of the island, “offering breath-taking views of Marina Bay”. Follow-on connections may include cross-border flights to enhance regional connectivity and offer what the company calls “significantly improved travel experience to Singapore’s closest economic centres”.

Volocopter is also making gains elsewhere in the region. In Japan it has an agreement with Osaka Roundtable to introduce air taxi services in the city around 2025.

A joint venture was created in April 2021 with China’s Geely Technology Group to roll-out electric air taxi services. The venture, Volocopter Chengdu, has a commitment for 150 aircraft including the VoloDrone and the four-seat, 52nm-range VoloConnect which is scheduled for certification and service entry in the second half of the decade.

Volocopter also has designs on South Korea, performing demonstration flights in November 2021 with the 2X at Seoul’s Gimpo and Incheon airports. In partnership with local firm Kakao Mobility, Volocopter has launched a feasibility study to examine the potential of UAM operations in the country.

It has also commissioned a study with Malaysia Airports Holdings – which manages 39 airports across the country – and Skyports to explore the potential deployment of electric air taxi services there. That study will be published later this year, says Volocopter.

Embraer’s UAM division, Eve, says it is also conducting “deep dive” surveys into number of cities across the Asia-Pacific where it sees a “vast market” for UAM services. The Melbourne, Florida-headquartered firm – which recently announced plans to float on the New York stock exchange – has secured tentative commitments for over 1,700 units of its five-seat eVTOL aircraft, also called Eve, which it plans to bring to market within the next five years. Asia Pacific-based operators account for nearly 10% of this total. Customers include Australian firms Sydney Seaplanes and Nautilus Aviation – with commitments for 50 and 10 aircraft respectively – and Singapore-headquartered Ascent Flights with a deal for 100 units.

“We expect sales in the region to soar as interest in the UAM concept gathers pace,” says Eve co-chief executive Andre Stein. He describes UAM as a “new frontier for aerospace and an entirely new business model for everybody”. 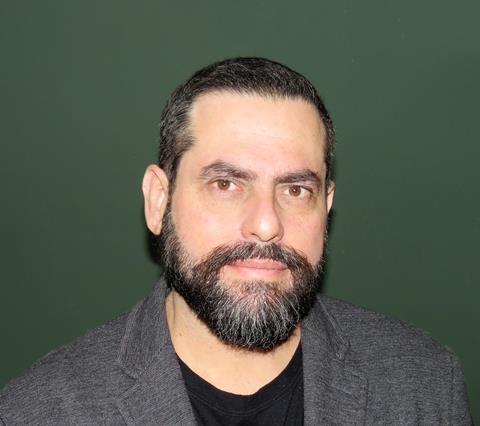 Manufacturers entering this sector, Stein concedes, “are looking beyond their traditional role of building and selling hardware to the end user”.

Eve is “selective” in its choice of customer, he says. “We are seeking to collaborate with local operators, to create opportunities together and share the risk and the growth.”

Before the UAM sector can realise its potential in the Asia Pacific, Stein says “it needs to create and build the ecosystem – infrastructure, systems and technologies – to support the vast number of electric models both on the ground and in the air”.

He continues: “No-one yet knows how to operate this new genre of aircraft, so if we share the risk, there is a massive potential for growth. A lifetime opportunity for something that’s a real win-win.”

He suggests that while Embraer’s home country of Brazil is a “natural choice” to launch the first eVTOL services, “so too is the Asia Pacific, given the sheer size of the market and its eager customer base”.

The partnership builds on a 2019 concept of operations developed by Eve and Airservices Australia, which saw Microflite play a contributory role. Melbourne has been earmarked as the testbed for electric air taxi services in the country.

“We are talking to several different [air service providers] in key markets across the Asia-Pacific,” Stein says.

Lionel Sinai-Sinelnikoff, founder and chief executive of Singapore-based Ascent Flights, says the Asia-Pacific is “crying out for UAM”, and he expects the region to spearhead the “eVTOL aircraft revolution”.

“Asia Pacific is undergoing the largest growth in urbanisation in the world and is home to the highest concentration of megacities such as Beijing, Jakarta, Manilla and Tokyo,” he says.

Even a small city-state like Singapore is an ideal hub for eVTOL-based services, he continues, due to its proximity to other popular islands as well as the “bustling” Malaysian market.

“Such is the interest in the UAM model across the region, we have been invited by a number of countries to work on an air mobility solution,” says Sinai-Sinelnikoff.

However, Asia-Pacific presents a number of “unique” challenges due, Eve’s Stein says, to the “diversity of its markets”.

“There are different cities, different communities, which will have different needs and requirements,” he adds.

Gaining certification for the Eve across the region is not a “big issue”, Stein concedes, as many of the regulators in the key markets look set to adopt the new common eVTOL standards spearheaded by the European Union Aviation Safety Agency and the US Federal Aviation Administration. “However, there could be different standards for noise levels depending on the city,” he says.

In conurbations where helicopters are already a common feature of the urban transportation system – Manilla and Jakarta for example – there will be more tolerance to the “much quieter” eVTOLS.

A survey conducted by Volocopter in Singapore following its October 2019 public demonstration of the 2X delivered a spectator approval rating of 75%, the German developer says, with the majority of respondents stating that the eVTOL aircraft low noise profile “exceeded their expectations”.

Stein admits, however, that tolerance thresholds for noise and nuisance are subjective. “Getting the public to embrace UAM will be easier if these new, time-saving, innovative platforms are available to the masses, rather than a privileged few,” he says.

Focusing solely on the benefits of a few wealthy individuals – much as a conventional VIP helicopter market does today – will prevent UAM from realising its full potential, says Stein. The industry needs to lower the barrier to entry and make this new generation of aircraft available to the masses, he argues.

“This can only be done by addressing operational costs,” Stein notes. Not only should these new eVTOL aircraft be designed for ease of manufacturing, maintainability and reliability – key aspects Embraer has learned through its commercial and business aviation divisions – “but to truly democratise this form of air travel in the Asia Pacific we need to build a large, diverse fleet of aircraft, that are positioned in sweet spots within key markets”.

The product must also be desirable, says Stein. Late last year, Eve conducted a month-long trial in Rio de Janeiro to test a proof-of-concept for future operations of its eVTOL aircraft.

The evaluation was conducted on a “all-new, straight route” between the east side of the city and the airport, using a helicopter supplied by local operator Helisul. Tickets were sold to the customers through Brazilian broker Flapper. A key aspect of the trial, Stein says, was to engage with the end user, and this was a “great success” with over 600 passengers flown, many taking a flight for the first time.

Eve now plans to replicate the trial using direct routes in other cities across the world, including in the Asia-Pacific, says Stein.

Ascent calculates the cost of an eVTOL aircraft transfer from downtown Manilla to the commercial airport will be approximately $50 per seat, compared with $150 per seat on a helicopter.

“This offering is appealing from both a cost, sustainability and time-saving perspective, given it can take up to three hours to do the same journey by car,” says Sinai-Sinelnikoff. “For travellers in the Asia-Pacific, like elsewhere in the world, time is the ultimate currency,” he adds.

Ascent plans to offer a range of eVTOL aircraft to complement its line-up of business aircraft, seaplanes and rotorcraft. The company provides cargo, medevac and passenger transport across its bases, which include the Philippines, Singapore, Thailand and the United Arab Emirates.

Sinai-Sinelnikoff says it will take time to develop the UAM market in the Asia Pacific and gain public approval for these all-new aircraft types, not least in their automated form, which is the ultimate goal for the developers.

To help prepare for market entry of its first passenger eVTOL, Ascent plans to explore the use of beyond visual line of sight (BVLOS) drones for cargo transport and logistics. A partnership announcement with an OEM is imminent, Sinai-Sinelnikoff says, and operations from an undisclosed base are scheduled to start by year-end.

“Our objective is to accelerate the frequency of flights with these all-electric BVLOS aircraft to demonstrate the vital role that these aircraft play and to gain public trust” says Sinai-Sinelnikoff.