Fractional ownership operator Jetfly has taken delivery of its first PC-24 from a 2013 order for four of the superlight business jets. The aircraft (LX-PCA) was handed over to the Luxembourg-headquartered company on 14 September, entering service three days later, said company executive Cédric Lescop.

He describes the demand for the eight-seat type as “very strong”, with shares in the first three examples sold out before the first aircraft was handed over.

“We plan to take delivery of our second PC-24 in November, and the remaining two aircraft in June and December 2019,” adds Lescop. 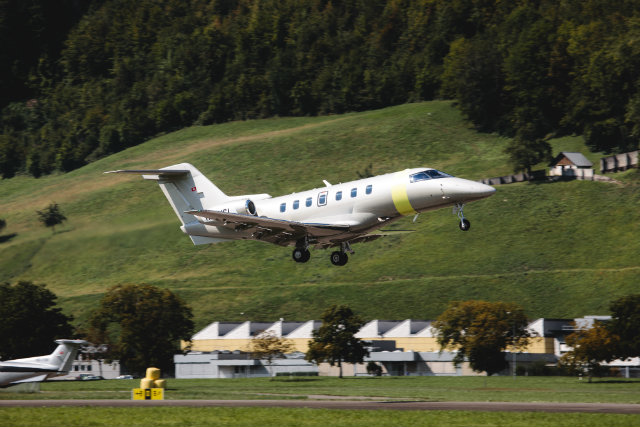 As with many other PC-24 customers, Pilatus restricted Jetfly’s order intake due to the huge demand for its flagship aircraft: the first tranche of 84 units sold out within 36h.

“We would have bought more, but will have to wait until Pilatus re-opens the orderbook,” Lescop says.

Pilatus has hinted at a second order round beginning in May 2019 at the European Business Aviation Convention and Exhibition in Geneva.

Jetfly is the largest operator of the PC-12 single-engined turboprop in Europe, with a fleet of 22 aircraft in its fractional ownership programme. A trio of Cessna Citation CJ3s are used by the company to provide lift for its fractional customers – although no shares are sold in these aircraft – and to support its light jet pilot training programme. “We plan to keep the CJ3s for three years – then we should have built a sufficient fleet of PC-24s,” says Lescop.

Pilatus has delivered 10 PC-24s to date and remains on track to hit its 2018 target of shipping 23 of the twinjets.