Dassault’s Falcon 8X is making its Middle East debut, less than a month after the first example of the ultra-long-range business jet was handed over to a Middle East customer.

“The delivery of an 8X to a regional operator – barely a month after the entry into service of the first aircraft – says a lot about the important role the Middle East is expected to play in the success of our new flagship,” says Dassault’s international sales director for the Middle East region, Renaud Cloatre. “The aircraft’s first showing at the MEBAA in Dubai is also anticipated to generate a great deal of excitement among Gulf operators,” he adds. 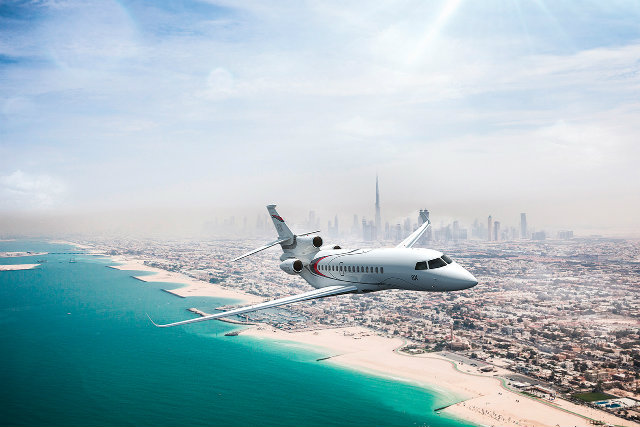 The French airframer expects the 8X will be a popular choice for buyers in the Middle East. “Like the 7X - Dassault’s most popular offering in the region - the 8X is expected to be a big seller, where operators value the exceptional combination of range, cabin comfort and operating efficiency," says Cloarte, He is referring to the flagship aircraft’s 6,450nm (11,930km) range, which allows it to fly non-stop from New York to Dubai, Dubai to Adelaide, or Chicago to Jeddah.

The 8X was launched in May 2014, as a stretched and longer-range version of the then nine-year old 5,950nm 7X. It entered service on 5 October with Greek business aviation services provider and long-time Falcon operator Amjet Executive.

The Middle East Falcon fleet has nearly doubled in the last seven years to over 70 aircraft, and continues to grow despite the softness of the current global market.

The 8X has secured a number of validation to date including European, US, UAE and Brazil and is slated to receive Chinese approval shortly. The 8X comes to the market with fully mature system capabilities demonstrated during a month long global proving trial campaign earlier this year. A few key performance parameters, such as take-off distance and cabin noise, have even surpassed design objectives, says Dassault. “In fact, the soundproofing improvements engineered into the 8X make it even quieter than the 7X, which is the industry benchmark in aircraft noise,” it adds.

The 8X is joined on the MEBAA static by the large-cabin Falcon 2000LXS which is equipped with Dassault’s bespoke FalconEye combined vision system.