Alongside research and development support for the rotorcraft and commercial aerospace sectors, France is also to fund early development activities for next-generation business and general aviation aircraft.

Part of a wider €15 billion ($17 billion) financial support package for the nation’s aerospace sector, the aid is tied to decarbonisation efforts, with economy and finance minister Bruno Le Maire calling for France to “become the country of the carbon-free aircraft”. 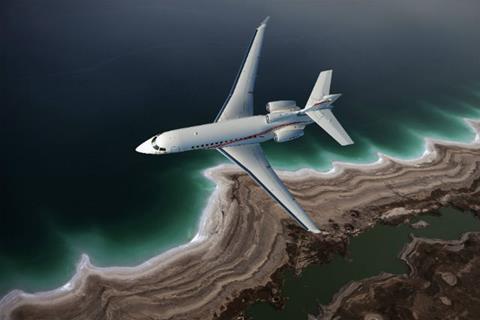 A total of €1.5 billion in R&D funding will be available over the next three years, to be split across several projects. This includes work to create a “new business aircraft running with 100% biofuel and, in the longer term, powered in part by hydrogen energy”.

While the beneficiary of this investment is not disclosed, France’s sole business aviation manufacturer is Dassault. Safran could also play a part as engine supplier.

In addition, a graphic included in the ministry’s presentation shows a timeline of potential Dassault development activities, from the current-generation Falcon 6X today, through the “Future Falcon” in around 2025, ending with the “Disruptive Falcon” in 2035.

The airframer has already hinted at plans to launch another business jet programme later this year which will join the 6X and Future Falcon in its line-up of in-development jets. Beyond a general welcoming of the measures, Dassault has not commented on the R&D pledge.

In addition, the ministry promises funding for a hybrid general aviation aircraft, and high-performance UAVs, with a demonstrator available in 2030.