Oriens Aviation, the exclusive distributor for Pilatus Aircraft in the UK and Ireland, is seeking to grow its maintenance, repair and overhaul offering and become a leading brand in the business aircraft support sector.

The move has been prompted by a trebling of the service interval for all PC-12 single-engined turboprops from May this year, which has triggered a decline in customer visits to Oriens' shop at London Biggin Hill airport.

"Pilatus has increased the service interval from 100h to 300h," says Oriens founder and chief executive Edwin Brenninkmeyer. While this is "great news" for owners, he notes, and helps Orien's PC-12 sales effort, the company's MRO business has been hit "as customers don't need to visit us as often".

Oriens began operations in 2016 and moved into the maintenance sector in 2018, following its acquisition of Avalon Aero's MRO facility at Biggin Hill.

The company has sold 10 PC-12s to date and maintains the majority of these aircraft at its 1,670m² (18,000ft²) hangar. Oriens recently reached an agreement with Luxembourg-based fractional ownership operator Jetfly to service and support third-party PC-12s that it can no longer accommodate at its service centre in Bournemouth, on the UK's south coast.

"Jetfly's fractional PC-12 fleet has become so big [22 units], it does not have the capacity to maintain aircraft belonging to other owners," says Brenninkmeyer. 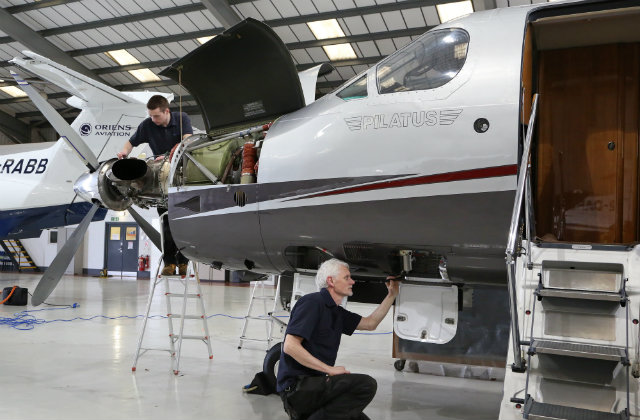 To bolster its PC-12 support offering, Oriens has sought European Part M, subpart G approval, which will allow it to maintain and sign off commercially operated versions of the 10-seat aircraft in Europe.

While this fleet represents only 11 of the more than 250 PC-12s in the region, Brenninkmeyer is confident the total will continue to grow, as acceptance of single-engined turbine aircraft in a commercial transport role gathers pace.

While the PC-12 is a key focus for Oriens, Brenninkmeyer is also keen to build and strengthen its maintenance portfolio. Despite inheriting European approvals on a range of business aircraft from Avalon, including the Cessna CJ family of light jets, the midsize Hawker 1000, and Piaggio Aerospace P180 Avanti Evo twin-turboprop series, it has not actively marketed its capabilities.

"We have maintained a few Citations and a Hawker 1000, but no Avantis," says Brenninkmeyer. He says the Hawker 800 series, along with the Beechcraft King Air and Cessna Caravan families would be "a great addition" to its maintenance offering, but admits it is a challenge to attract new business in an industry where customer loyalty prevails.

"We are seeking to develop the Oriens brand, and become a well-known name in business aircraft support," he adds.