Soaking up the sunshine on the static display, Gulfstream’s G500 is making its Paris air show debut, although it is not the new twinjet’s first time at Le Bourget.

Just over a month ago, Gulfstream brought the clean-sheet aircraft on a mini European promotional tour, with stops including Paris and Geneva.

But, says Scott Neal, senior vice-president of worldwide sales at the US manufacturer, the new business jet is already attracting a lot of interest.

“It’s getting a lot of attention, so it’s great to have it at the Paris air show for the first time,” he says. 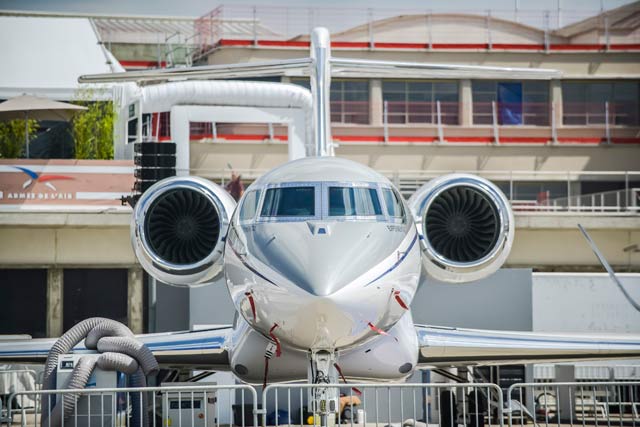 Gulfstream now has five aircraft in its test fleet, with the example on display at Le Bourget its first production-representative aircraft, featuring a full interior.

Neal says it is on track to achieve certification for the eight-passenger G500 in late 2017; delivery to a completion centre will follow shortly after.

Its sister aircraft, the longer-range G600, is tracking roughly 12 months behind, says Neal.

The airframer has not disclosed order numbers or a regional breakdown of its customers for either jet, but Neal says it has seen a “very strong response” to the pair in Europe.

Once both of the Pratt & Whitney Canada PW800-powered aircraft are in service, likely to be in early 2019, Gulfstream will have no new development programmes on its books.

But, says Neal, the company has a “very long-term product development strategy”, adding: “The 500 and 600 are not the end of new aircraft for Gulfstream.” However, he declines to speculate on the class or timeline for any future launch.