Pegasus One lands at EBACE

Pegasus Universal Aerospace has arrived at EBACE to formally launch its vertical take-off and landing business jet (VBJ), known as the Pegasus One.

The South African start-up is debuting a one-eighth scale model of the aircraft at the show and is also opening the orderbook for the eight-seat type.

Pegasus's arrival in Geneva comes seven years after Reza Mia, founder and chairman of the Pretoria-based company began exploring the possibility of building a light business jet with the take-off and landing performance of a helicopter. 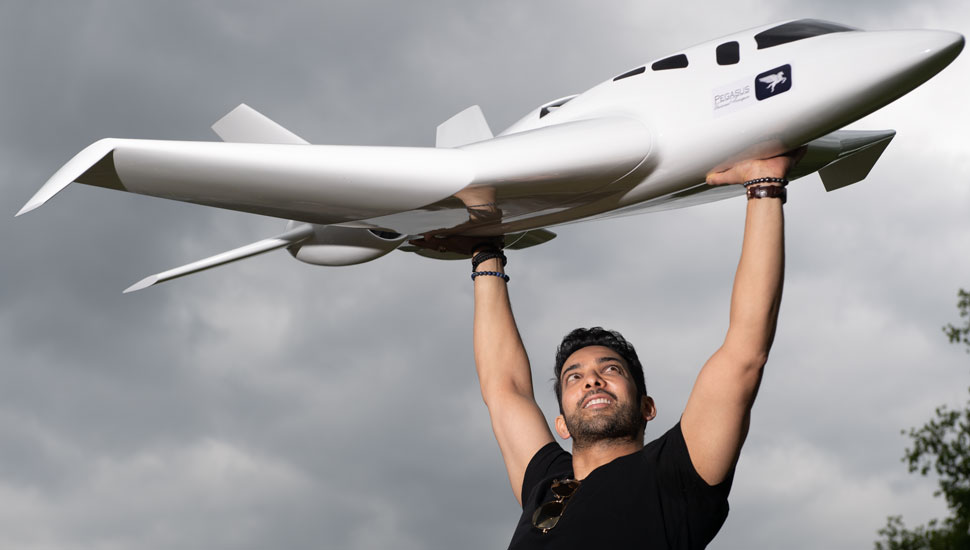 "Business jets are capable of moving people through the air quickly, but a lot of time is wasted travelling on the ground to and from the airports, which are often located far away from busy financial and residential centres," says Mia.

Eliminating this time-consuming ground travel often requires the use of a helicopter at each end of a trip, which can be expensive and inconvenient, he adds.

By combining these two features into one aircraft, the Pegasus One introduces "a new era of point-to-point travel," says Mia, "with the capability to land in a built-up area, helipad, yacht and on any surface, including grass or gravel".

The all-composite aircraft has a cranked dihedral wing and an x-tail design. It uses two turboshaft engines – Pegasus is considering the GE Aviation CT7-8, among others – to drive in-wing lift fans and rear thrust fans through integrated gearboxes, all managed by multiple redundant computer systems.

The landing-gear layout is still to be finalised between tricycle and tandem with outrigger layouts, says Mia.

With an empty weight of just under 5,700kg (12,560lb), the Pegasus One can be used for single-pilot operations.

Pegasus is also at EBACE to hold discussions with potential suppliers for the VBJ's avionics suite and automatic control systems. Mia says the latter feature will make the aircraft "safe and reliable by reducing pilot workload".

A one-eighth scale model has undergone testing in Pretoria to demonstrate transition from horizontal to vertical flight and Pegasus will soon begin assembling the first full-scale prototype with a view to beginning flight testing in June 2020.

"We are working hard to build a full-scale cabin mock-up of Pegasus One which we plan to bring to London to start a demonstration tour of Europe in 2020 to drum up interest," says Mia. "We look forward to meeting forward-thinking investors and of course potential operators during the tour," he adds.

To date, the programme has been funded by Mia, but Pegasus expects up to $400 million will be needed to bring the aircraft to market.

Pegasus has identified a customer base that spans the civil and executive aerospace sectors, offering operational benefits unlike any other aircraft. Along with Europe, India and China are key markets, Mia says.