The first Boeing BBJ Max 8 has arrived at Comlux Completions' Indianapolis facility for cabin outfitting, with the finished aircraft scheduled for delivery to its unnamed US owner before the end of the year.

The green, VIP narrowbody was originally delivered to Comlux in late November 2018 – 14 months after the company was named as the interior outfitter for the re-engined aircraft. It was then transported to another firm for exterior painting. 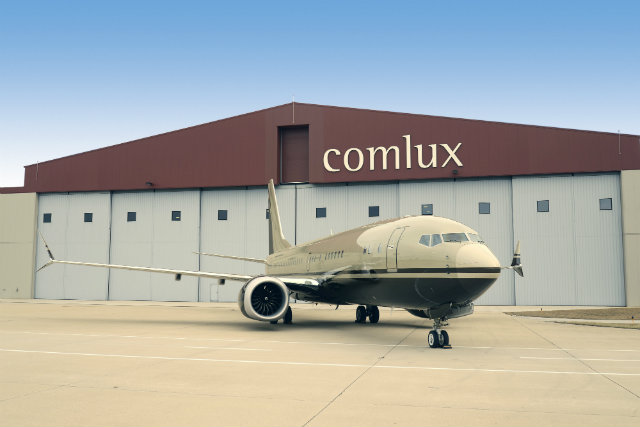 The cabin of the CFM International Leap-1B-powered BBJ has been designed by New York-based architect Peter Marino, says Comlux. Details of the interior layout will not be revealed, it adds, as the aircraft is to be operated solely for private use by its "ultra-high-net-worth" owner.

The firm is scheduled to take delivery in 2020 of two more green BBJ Max 8s, one of which will be owned and operated by its sister company, Comlux Aviation, and made available for charter.

Boeing holds 19 orders for the BBJ Max family: 12 Max 8s, three Max 9s, and four Max 7s. Three orders remain on backlog for the original BBJ, based on the 737NG airframe. Boeing also holds an order for a BBJ 787-8 widebody.