Textron Aviation is in the final stage of the certification effort for its Cessna Citation Longitude, and expects to secure US approval and begin customer deliveries of the super-midsize business jet before the end of the second quarter. European validation is expected around six months later.

Speaking during a stopover in Farnborough, UK, on the final leg of the Longitude's three-week international demonstration tour, Textron Aviation's vice-president of sales, Europe, Tom Perry, told FlightGlobal: "Since flight testing began [in October 2016], five aircraft have joined the campaign, accumulating more than 2,000h across 1,000 flights. We are almost there."

Once the certification effort is complete, he expects up to four of the production-conforming test aircraft to be added to the demonstrator fleet. 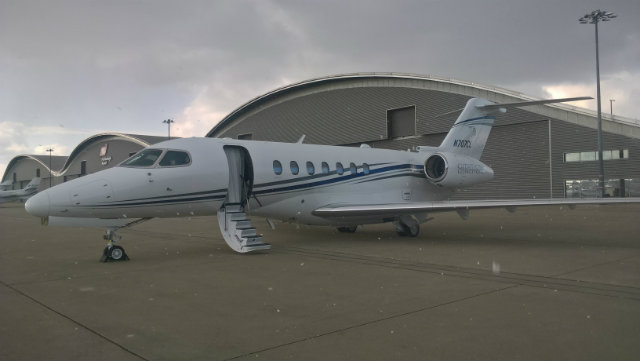 The tour, which began in early February using aircraft serial number seven, has been "very successful", Perry says, helping to raise interest in its flagship model throughout Asia, Australasia, Europe and the Middle East.

Much of the demand for the Longitude, he says, is coming from existing Citation customers looking to move up to a larger and longer-range model. "We are also seeing interest from owners of rival super-midsize models such as the [Bombardier] Challenger 300/350 and [Gulfstream] G280," says Perry.

The 3,500nm (6,480km)-range Longitude is entering service as the business jet industry begins to emerge from one of the bleakest periods in its history. "We had quite a good year in 2017, with sales and deliveries of Citation jets up on the previous 12 months," says Perry. "We are also off to a great start in 2018, with 25% of planned production for the year, already sold out."

Meanwhile, assembly of the first prototype Denali single-engined turboprop is now underway at Cessna's Wichita headquarters. It is expected to make its first flight before the end of the year.

Perry says Textron has been "very encouraged" by the market response to its pressurised, six-seat model – the first platform to be powered by GE Aviation’s Advanced Turboprop engine – with "several commitments" received so far from private owners, corporate and charter operators.

"We will issue purchase agreements to these customers by the end of March, and start converting these sales into firm orders," says Perry.