Pilatus Aircraft’s PC-24 made its first landing on an unpaved runway on 19 June, following the arrival of flight-test aircraft P01 at Woodbridge airfield in the UK for a two-week programme of rough-field approval testing.

The evaluation at the former RAF base in Suffolk, in the east of the country, forms part of the superlight business jet's post-type certification effort, which Pilatus hopes to wrap up in the fourth quarter.

The Williams International FJ44-4A-powered PC-24 is designed to take off from and land on runways of only 856m (2,810ft), including grass and gravel strips. This feature gives the aircraft access to over 20,000 landing sites around the globe, says Pilatus – more than twice as many as competing light-jet category models such as the Cessna Citation XLS+ and Bombardier Learjet 75.

"This sort of mission would not be conceivable without the PC-24's rugged landing gear, clever flap systems and special wing design," says Pilatus chairman Oscar Schwenk. "The PC-24 was designed with exactly this sort of operation in mind." 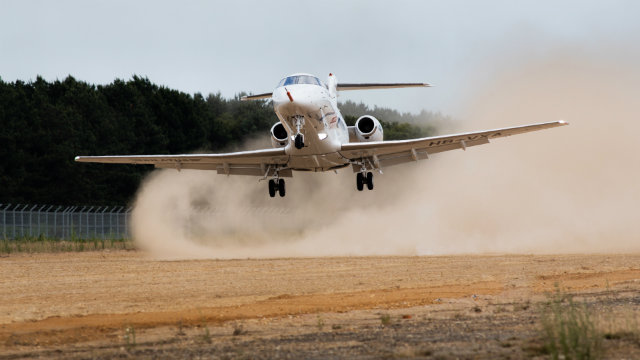 Pilatus secured type certification for the eight-seat twinjet in December 2017, and has delivered five examples to date, from a planned output of 23 aircraft in 2018. The Swiss airframer sold all 84 positions within 36h of the orderbook opening in 2014.

A second order round is planned for 2019, says Schwenk, once Pilatus has secured the necessary performance data from a broad fleet of in-service PC-24s.

This includes aircraft operating from short, unpaved runways, such as with Australia's Royal Flying Doctor Service. The aeromedical operator has an order for five air ambulance-configured PC-24s, with the first two units scheduled for delivery in October and November 2018.