Stratos Aircraft has expanded the cabin of its developmental very light jet following market feedback and has rebranded the aircraft to reflect its new, roomier proportions.

Now known as the 716, the changes to the former 714 were revealed by the Redmond, Oregon-based start-up at the AirVenture show in Oshkosh, Wisconsin in late July. Stratos showed off a one-eighth scale model of the modified single-engined jet, which it describes as an "evolution" of its predecessor.

Stratos says it increased the size of the passenger cabin based on feedback from potential customers. “People told us that the current design is too small to comfortably seat six passengers and crew, plus baggage,” says chief technical officer Carsten Sundin. “So we have lengthened the cabin by 31in [77.5cm], and added 3.5in to the width to give owners and operators that extra space.”

The first batch of 716s will be produced as kit aircraft and branded the 716X. This approach, Sundin says, will allow the company to “fine-tune” the product before it embarks on a “very expensive” Federal Aviation Administration FAR Part 23 type certification campaign.

"We see producing a limited number of kit aircraft as a logical step towards certification,” he says. “It will also allow customers who don’t want to wait for approval an opportunity to own and operate a version of the 716 much sooner.” 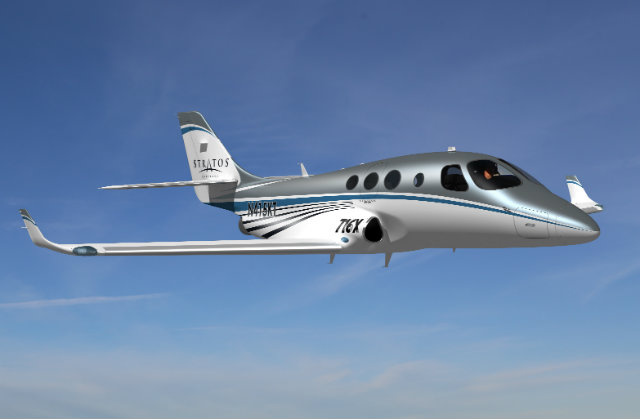 The first 716X has been sold and is now being produced at the company’s 3,900m² (41,000ft²) manufacturing facility. “We aim to have the aircraft completed and in customer hands by the middle of 2019,” says Sundin.

Stratos has not set a timeframe for development of the certificated variant of the 716, and Sundin says the company will not start work on the first production-conforming model until it has “refined” the kit aircraft.

“This will give us a much better understanding of the product, and put the company in a strong position when we start talking to investors,” says Sundin.

He will not disclose how much finance is needed to bring the Part 23 variant to market, but says it will be “several million [dollars]”.

The 714 was launched in 2008, and the initial aircraft made its maiden flight in November 2016. To date, the example has logged 200h across 140 test flights. Stratos will continue to fly the aircraft “as long as it's useful to us”.

The 716 is pitched against the Cirrus Vision Jet – currently the only Part 23-certificated single-engined jet on the market – the Embraer Phenom 100EV entry-level twin, and the Daher 910/930 single-engined turboprop.