The US business aviation market has been experiencing solid growth for some years now, thanks to a healthy domestic economy and a strong pipeline of innovative products and services ready to stimulate an eager customer base.

The US business aviation market has been experiencing solid growth for some years now, thanks to a healthy domestic economy and a strong pipeline of innovative products and services ready to stimulate an eager customer base.

Cirium fleets data records an installed fleet of nearly 19,000 business jets and turboprops in the country, which represents more than 60% of the global inventory and 95% of the tally for North America. The USA consistently accounts for more than half of new business jet deliveries each year, with small and midsize-category models making up the bulk of the output. Since 2015, this share has grown to over 60%, climbing in 2018 to nearly two thirds of the 703-strong business jet output for the year.

Turbine aircraft shipments to US customers have climbed from a trough of 325 units in 2010 to over 600 in 2018, according to Cirium.

This is significantly down on the 2008 market peak of 943 units, according to data from the General Aviation Manufacturers Association (GAMA), but Peter Bunce, chief executive of the Washington DC-based industry trade body calls this brief period “hyper-inflated”.

“The USA is good, solid market and has been for some time,” he argues.

“While it may not be like boom of 2007-2008, which some people like to compare it to, this was not a normal market and we don’t want to return to those days.”

Bunce expects the situation will change little over the coming years, as “pent-up demand from years of deferred aircraft purchasing is now being released into the market”.

His view is echoed by Honeywell. In its latest business aircraft industry forecast, the engines and avionics supplier estimates that North American operators will account for more than 60% of projected global demand between 2019 and 2024, with over one-third of operators responding to their survey planning to schedule their new purchases within the first two years of the five-year period.

Bunce cites the consistently strong US economy as a key driver, with growth expected to be between 2% and 3% in 2019. Economic prosperity has also triggered an explosion in the number of US-based ultra-high-net-worth individuals – a vital demographic for the industry, he notes.

Ed Bolen, president of the National Business Aviation Association, says there is an argument that corporate profits are not as directly linked to business aircraft purchases in the USA as has historically been the case.

“I don’t know why that is,” says Bolen. “But it is apparent that people want access to business aircraft more than ever, and the spectrum of operating models in the USA is as wide as it has ever been.” These offerings include ad hoc charter, per-seat scheduled services, card programmes, subscription-based models, leasing, fractional and whole aircraft ownership. “There are lots of ways today to find the right aircraft for the right mission,” says Bolen.

His view is echoed by aviation analyst Brian Foley. He points to “a change in buyer behaviour as younger, new US flyers want access to an aircraft, without the commitment of full ownership. “This has kept new airplane sales and fractional shares in check, and has benefited many of the newer business models featuring membership and phone app integration,” he says. “Charter operators not adapting to this new normal will become less competitive,” Foley adds. 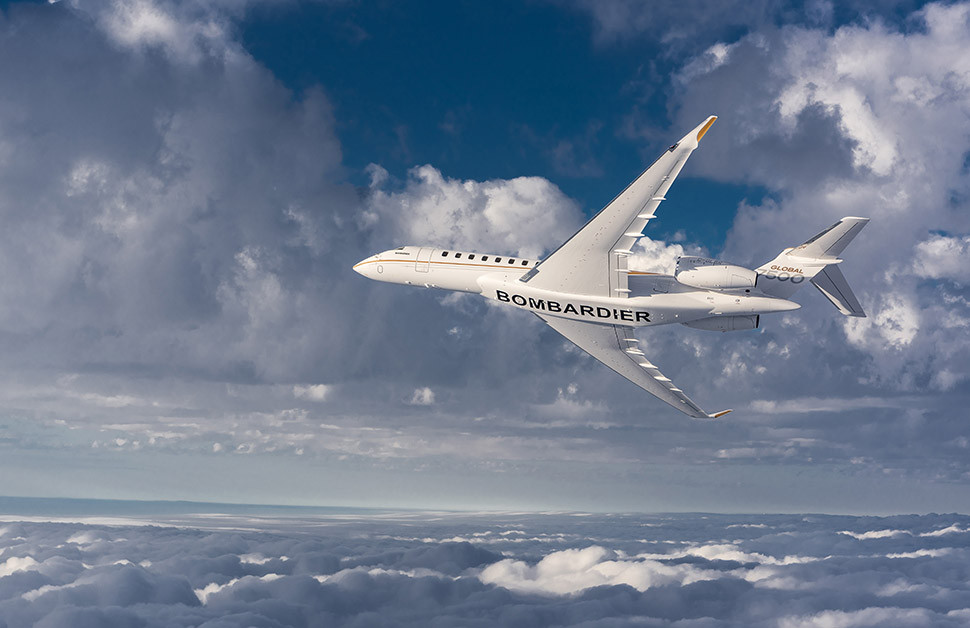 The introduction of a plethora of new designs has also helped to stimulate interest from US buyers, and, making the current period arguably one of the most active in the industry’s history. No fewer than 10 new models have entered service in the past two years, with the USA the launch market for most of them. Notable amongst these types are: Bombardier’s flagship Global 7500, Gulfstream’s clean-sheet superwide-cabin G500 and G600, Embraer’s midsize Praetor 500 and 600 and Pilatus’s superlight PC-24 – the first business jet offering from the Swiss airframer.

“Customers are clearly enamoured with some of the latest products and services on offer, including several recently certificated aircraft that are in ramp-up mode,” says analyst Rolland Vincent. “New and improved” – but especially “new” – is what is in demand, he argues. “Given that many customers might have sat on the sidelines and skipped an airplane replacement cycle in the 10-plus years since the financial crisis, some of these new aircraft have clearly captured their attention,” Vincent adds.

While there is always a segment of concept or first-time buyers, the vast majority of sales activity in the USA is from existing owners. “They have been on this merry-go-round before, and know how to negotiate a good deal,” he says.

Another striking – and perhaps unique – feature of the USA is its incredible infrastructure. Bunce cites 5,000 public service airports and another 13,000 airfields, private sites and landing strips located across the country and serving businesses, such as fly-in-fly-out mining companies and private owners.

Vincent says the US airport infrastructure is unmatched in density anywhere else in the world. The US air traffic control and air navigation systems serve the needs of commercial airlines, business and general aviation “very well” and at relatively low user cost compared with other countries. “It works well, and except for a few well-documented flash points at the big airline hubs, has available capacity to serve a broad range of customers,” says Vincent.

The country’s current tax legislation is also contributing to a favourable business aviation climate, although its significance is difficult to quantify. Under the rules – introduced in 2017 by the Trump administration and scheduled to expire in 2023 – a company can write off 100% of tax against capital expenditure, such as a new or used business aircraft, in the first year of purchase. Previous rules allowed 50% of tax to be written off on a new business jet in the first year, followed by 10% for each subsequent year.

“Anecdotal evidence suggests that this measure has helped to close a sale, particularly at the end of the year, when the buyer can take full advantage of the tax-break,” says Bunce. It has also encouraged buyers to consider larger, more expensive models.

While the jury is still out on the effect of this tax measure on aircraft purchases, the continued strength of the US market is undoubtedly a welcome relief for the buyers and sellers of business aircraft and services, given the fall in demand from international buyers. 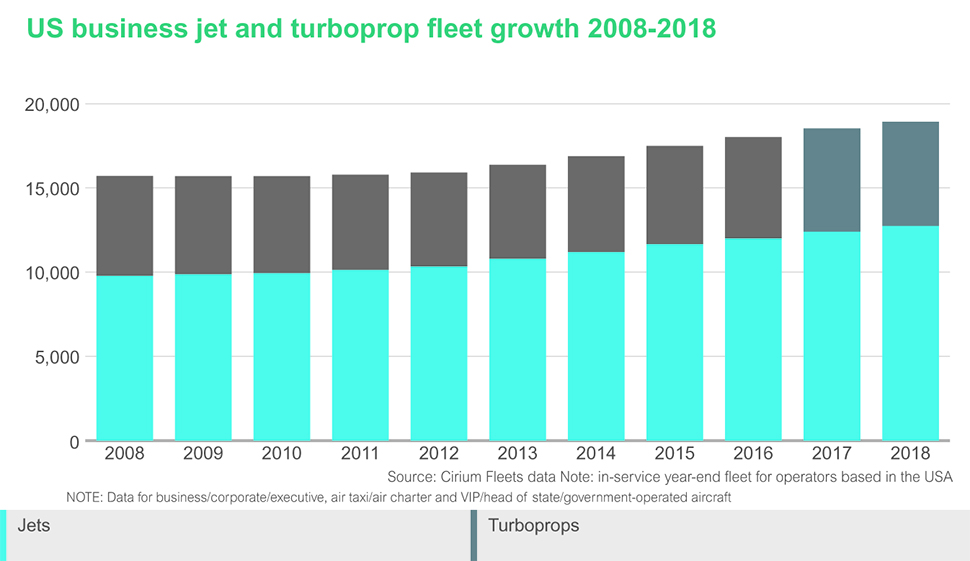 Most striking is the collapse of the once-booming Chinese market, due to the country’s faltering economy. US-China trade tensions have added to the gloom, although Bunce suggests the dispute is having more of an impact on the industry’s supply chain, rather than on the airframers directly, as sales to the region have “fallen so rapidly in recent years”.

“It may just take a little longer for the Chinese market to recover”, he adds.

Uncertainty surrounding the UK’s exit from the EU is also making the industry jittery, as is the weak German market, which Vincent describes as “dangerously close to recession”.

Of course, the US market is also susceptible to a downturn. “We are now in the 10th year of market expansion – the longest in the post-war period,” says Bolen. “This prompts the question: if everything is cyclical, how long will this expansion continue?”

While the industry mulls over this conundrum, innovation will continue unabated with the US business aviation community spearheading initiatives to keep the industry both appealing and relevant now and in the future.

Central to this strategy is reducing the environmental footprint of the industry. Green projects abound, including the development of a new breed of aircraft that will be significantly quieter and have lower carbon footprints than conventional fixed-wing types and helicopters; the introduction of sustainable powerplants to drive the current and next generation of business aircraft, and the push for a widespread implementation of sustainable fuel alternatives for the thousands of in-service aircraft. 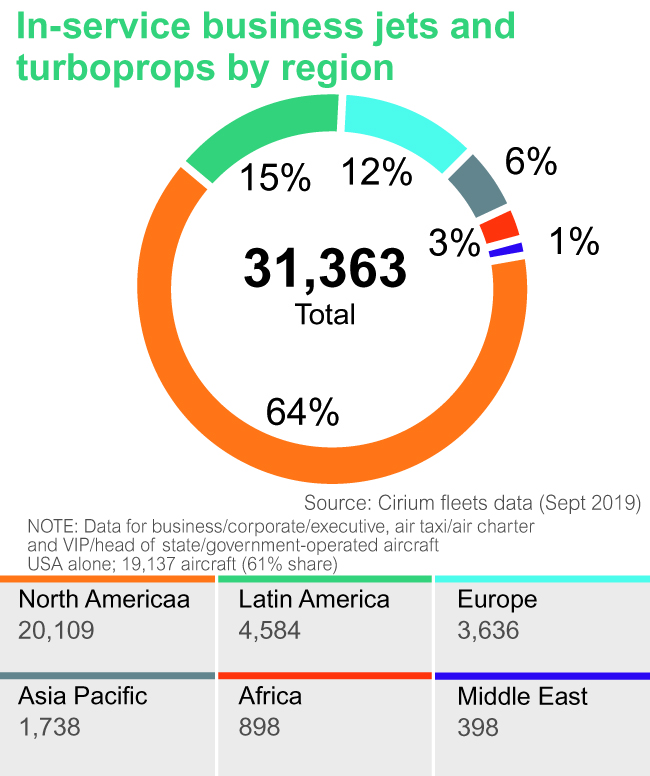