The mid fuselage of the first Comac C919 aircraft has rolled off AVIC Xian Aircraft Industry's production line, as the airframer works towards starting final assembly of the narrowbody by end 2014.

“The successful roll out of the mid fuselage is an important achievement of the whole fuselage work package, and at this point, the C919 aircraft has taken a solid step towards structure roll off,” says Comac. 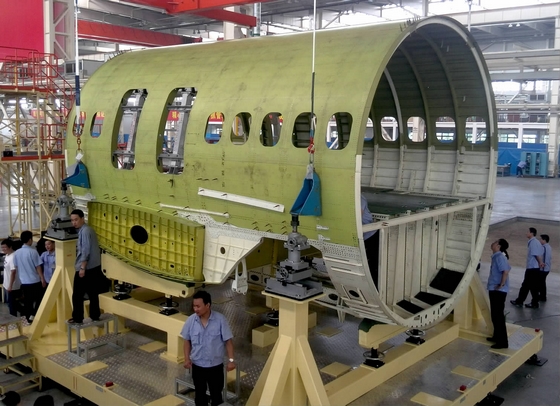 A spokesman tells Flightglobal a delivery ceremony will be held on 29 August at AVIC's facility in Xian. The part will then be delivered to Comac's Shanghai facility in September.

He adds that the airframer has also taken delivery of the C919's first forward fuselage on 24 August. This part, manufactured by Jiangxi Hongdu Aviation Industry, is the first major C919 structure to be delivered to Comac.

Late last month, the nose section of the first C919 aircraft also rolled out of AVIC CAC Commercial Aircraft’s facility. The 6.7m long section is expected to be delivered to Comac in September.

The Chinese airframer is working towards an end 2015 first flight target for the C919.