The UK Royal Air Force halted operations with its brand-new Airbus A330 Voyager tanker/transports for 12 days last month after a pilot’s improperly-stowed camera became jammed next to one of its side-stick controls in flight and caused a sudden loss of altitude, according to a newly-published report.

“The incident involving Voyager ZZ333 occurred on 9 February 2014 when the aircraft suddenly pitched down while in the cruise at Flight Level 330 (33,000ft),” the UK Military Aviation Authority (MAA) says in an interim report. “Within 27sec the aircraft lost 4,440ft in height, before the self-protection system initiated a recovery back towards controlled flight.” The maximum recorded rate of descent was approximately 15,000ft/min, it adds.

In its 19 March report, the MAA highlights the catalogue of events leading to the incident, which happened in Turkish airspace during a planned non-stop air transport flight between RAF Brize Norton in the UK and Camp Bastion, Afghanistan. The aircraft was carrying nine crew members and 189 passengers.

With the aircraft’s autopilot engaged and while its co-pilot was away from the cockpit in the forward galley, crew members reported feeling a sudden “jolt”, before encountering a sensation of weightlessness as the aircraft rapidly entered a nose-down attitude. “The resulting negative g forces were sufficient for almost all of the unrestrained passengers and crew to be thrown towards the ceiling, resulting in a number of minor injuries,” the report says. “The co-pilot struck the cabin roof, but was able to re-enter the flight-deck through the open door,” it adds.

The two crew members recovered control after the Captain had attempted to disconnect the autopilot, first by pulling back on their side-stick controls and moving the thrust levers to idle, and then by restoring them to take-off and go-around power as the twin-jet returned to a level attitude. The aircraft was then diverted to Incirlik air base in Turkey without further incident. 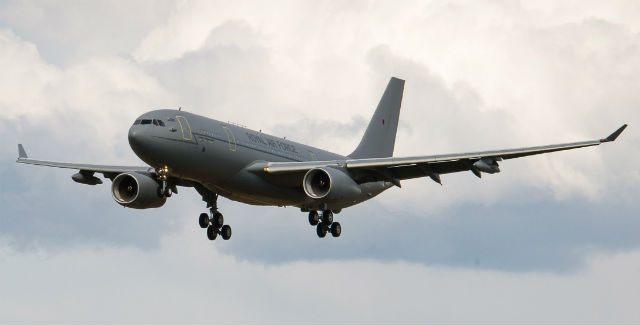 “The flight data recorder has shown no indication of system failures which could have led the aircraft to pitch-down,” the MAA says. “Moreover, the Inquiry has found no evidence of unsolved comparable incidents in any A330 variants.”

Instead, it says it is confident that human factors were to blame, pointing to “a digital SLR camera obstruction which was in front of the Captain’s left arm rest and behind the base of the Captain’s side-stick at the time of the event”. The camera body experienced a “significant compression… consistent with having been jammed between the arm rest and the side-stick unit”, it adds. “Analysis of the camera has confirmed that it was being used in the 3min leading up to the event,” while data recorders also note the Captain’s seat being moved forward “at the onset of the event”.

The MAA says it is continuing its Service Inquiry into the incident and “post-occurrence management of the event”, but notes that simulations have successfully replicated the same pitch-down effect after objects have become inadvertently lodged in the same space. “Safety advice has been issued to the RAF and to Airbus to highlight this possibility,” it says.

With its Lockheed TriStar tanker/transports due to be retired on 31 March, the RAF's fleet of AirTanker-provided Voyagers is poised to assume the bulk of the UK's military passenger transport tasks and all in-flight refuelling duties for the service.