By Brendan Sobie in Singapore

Xiamen-based TAECO and Boeing held a re-delivery ceremony for the aircraft on Monday and JAL says it will be flown to Japan on 3 June, following Japan Civil Aviation Bureau (JCAB) certification and ground operation tests. 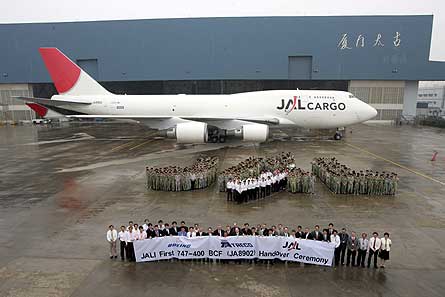 Boeing says it is the second aircraft to be converted under the new 747-400 Boeing Converted Freighter (BCF) programme, following the delivery of the first 747-400BCF to launch customer Cathay Pacific Airways in December.

JAL has seven more 747-400BCFs on firm order and holds options for another four aircraft. SIA Engineering (and not ST Aero as previously reported) has acquired conversion kits from Boeing to carry out conversions on SIA aircraft.