The USA’s Defense Advanced Research Projects Agency has issued a solicitation inviting industry to be involved in the first phase of an effort to develop “collaborative autonomy” capabilities for unmanned air vehicles.

Under its Collaborative Operations in Denied Environment (CODE) programme, DARPA identifies the merits of unmanned air systems, but believes their capabilities are limited in long-distance operations and contested environments as they require constant, dedicated control.

“Collaborative autonomy has the potential to significantly increase the capabilities of legacy assets, as well as to reduce the cost of future systems by composing heterogeneous teams of UA [unmanned aircraft] that can leverage the capabilities of each asset without having to duplicate or integrate capabilities into a single platform.”

Using so-called “collaboration algorithms”, UAVs would be able to pass on the location of targets to each other, as well as offering different fields of view for target identification and navigational information over a network. 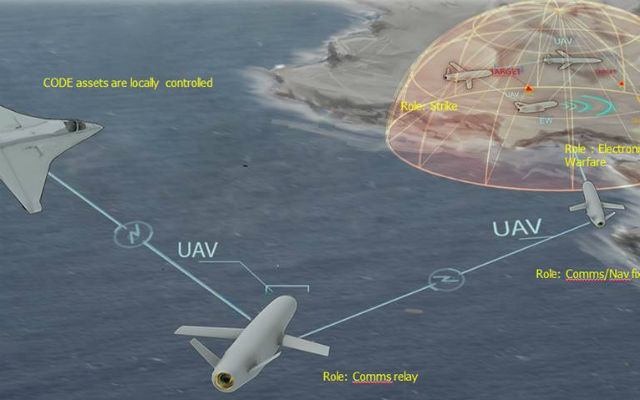 “CODE researchers seek to create a modular software architecture that is resilient to bandwidth limitations and communications disruptions, yet compatible with existing standards and capable of affordable retrofit into existing platforms,” DARPA says.

Responses are due by 4 February, ahead of two meetings planned for the first week of March, which will include one on open architecture and another on technology interchange.

The former will review the requirements for making CODE open architecture compatible with communication-constrained, distributed, highly autonomous collaborative systems, DARPA says, while the latter will see invited participants present technologies for potential incorporation into the demonstration planned for phases two and three of the programme.