DARPA selected Silent Falcon’s namesake unmanned aerial vehicle to test the feasibility of remotely charging an aircraft with a laser.

DARPA’s Stand-off Ubiquitous Power/Energy Replenishment - Power Beaming Demo (SUPER PBD) is scheduled to begin testing in January 2019 with the aim of charging the UAV via a laser at a distance of 10km, said Silent Falcon’s Chairman John Brown on 2 August. The Silent Falcon UAV comes with solar panels on its wings, which allows it to recharge in flight and extend its mission to about five hours, but when receiving charges from a laser it theoretically could fly indefinitely, he says. 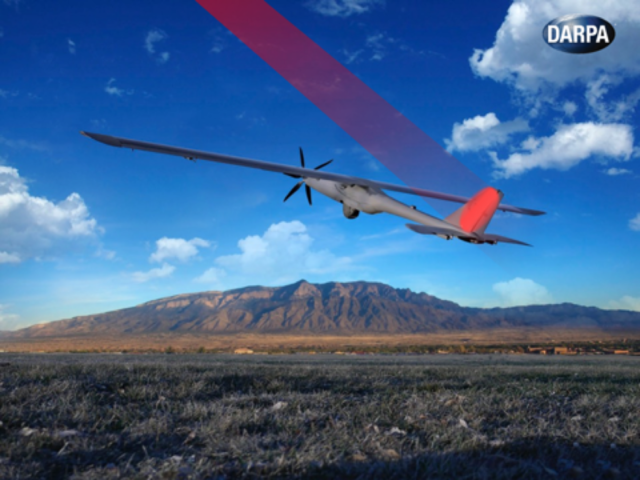 The SUPER PBD system is designed to transfer energy by projecting a laser onto a solar panel covering the Silent Falcon’s tail. The laser could be shot at the UAV from an aircraft above or ground station below; although for safety reasons the laser will be shot from a mountain perch down onto the UAV during testing.

“There’s major safety issues with shooting a laser up into the sky,” said Brown. “This [test] will be done at 10km, but we expect that range will be significantly increased in the future.”

Brown declined to say how much power could be transferred using a laser, but said he believed it could eventually be scaled up to power an aircraft with a human passenger. The UAV's ability to receive energy is degraded when there is matter in the laser's path such as clouds, smoke or rain, he added.

The Silent Falcon UAV has a 14ft wingspan and 7ft length. It weighs about 35lb and can carry a 3kg payload, such as a camera for surveillance.

The aircraft has a ceiling of about 20,000ft, but for military surveillance missions typically operates between 1,600ft and 5,000ft, said Brown.

Other suppliers in DARPA’s SUPER PBD project include Optonicus, which will supply the laser and UAV tracking and targeting technology, as well as SolAero Technologies and Ascent Solar Technologies, which will provide solar panels that are efficient at transforming laser light into electricity.

The total cost of the SUPER PBD programme is $2.2 million, said Brown.

The aerospace industry has a long history of attempting development of ultra-long endurance aircraft but few - if any - that recharge using a laser. Past ultra-long endurance aircraft have included piston-powered examples, such as Vanilla Aircraft's VA001, Aurora Flight Science's Orion, Scaled Composite's Voyager and Boeing's Condor. Recently high-altitude, solar-powered aircraft have been in vogue, including Airbus's Zephyr and AeroVironment's proposed HALE.