EasyJet tests UAV with A320 inspection

EasyJet carried out an inspection on one of its Airbus A320s at its Luton base using a new configuration of unmanned air vehicle, ahead of a planned rollout of the capability in 12-18 months.

The Remote Intelligent Survey Equipment for Radiation (Riser) quadrotor UAV – originally designed for gamma radiation inspection – and its sensors were developed by Blue Bear and Createc, and incorporate an avionics system that ensures the UAV stays 1m away from the aircraft it is inspecting.

Riser uses electro-optical, light detection and ranging sensors, which can correctly locate damage caused by lightning strikes – something that is currently carried out manually by staff.

The UAV features a two-laser infrared system that keeps it a safe distance from the aircraft, while a seven-laser handheld system developed by Ametek that is currently used by EasyJet for inspections could be incorporated into a payload for a UAV in the future.

Riser also incorporates a safety feature that forces the UAV to redirect if something unexpected enters its path, and its area of operation can be geofenced.

“There are times when we have to inspect the aircraft,” Ian Davies, head of engineering at EasyJet, said at the company’s innovation day on 4 June. “This takes many hours – a drone can do it much quicker… but is not easy to do. Tracking a drone outside with GPS is easy – inside it isn’t.

“This all has an end use – the time it saves that would usually take hours. This has a direct feed through to saving us money.” 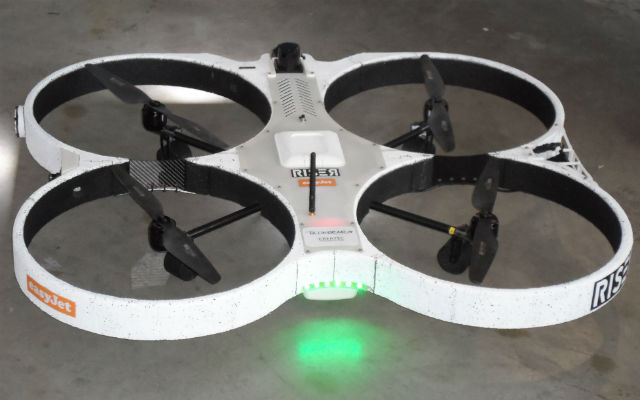 This effort has been in the pipeline at EasyJet for some time now, but testing has only just started with Riser. A contract between the parties involved has not been agreed as yet.

The business and safety cases for the operation of UAVs by EasyJet are yet to be determined – for example, the airline could operate the UAV on a services basis.

Yoge Patel, chief executive of Blue Bear, notes that this “heart and mind” of the system can be applied to a variety of applications, and could lead to a sense-and-avoid capability for UAVs – a key aim for expanding the use of unmanned systems and allowing for their operation in unsegregated airspace.

“The world wants collision avoidance, and here it is keeping the UAV away from people,” Patel notes. “It is very self-aware and it self-navigates and knows to a high precision where it is.”

She adds that “ultimately we want to be outdoors”, but current airspace restrictions limit testing to indoor locations. Blue Bear’s eventual aim is to develop “certifiable autonomy” that can allow for collision avoidance on all UAVs.

Meanwhile, two pre-production units of an ash detection system are expected to be delivered in January 2016 for testing, Davies notes.

The system will need to be certified to allow integration into aircraft, and the more data collected to help inform the decision, the better, Davies says. EasyJet hopes the system will be commercially operational by the end of 2017.