Schiebel’s Camcopter S-100 unmanned air vehicle is now flying above Ukraine, operating some 12h a day ahead of the deployment of a second system that will ramp surveillance coverage up to 24h.

Two systems consisting of four aircraft will be provided under a services contract signed on 13 August in support of the Organisation for Security and Co-operation in Europe (OSCE) special monitoring mission to Ukraine, for which Schiebel will provide 24h coverage to survey the region.

The vertical take-off and landing (VTOL) UAVs will support the OSCE’s work in monitoring the conflict zone in eastern Ukraine, and will be provided under an indefinite length month-by-month contract.

“The OSCE realised that the VTOL system brings a lot of advantages to the operation,” Hannes Hecher, managing director and chief executive of Schiebel told Flightglobal. “The helicopter has a clear map as to the route it wants to fly, and if something is detected, the pilot takes over control.

“For the OSCE, if something is detected… we stay there and watch.” 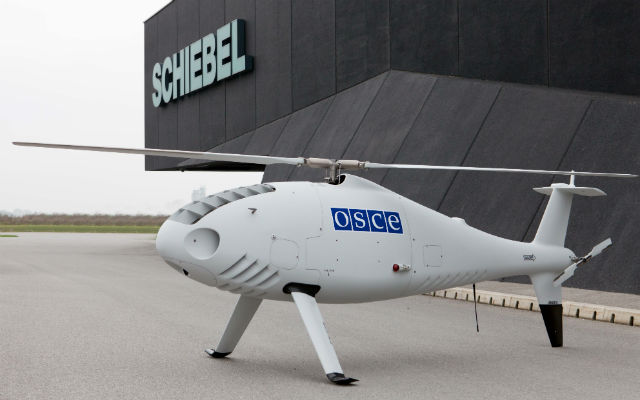 A fixed-wing aircraft cannot hover over an area for a long period of time, so an aircraft like the Camcopter lends itself to the operation because it can stop at an altitude of some 3,280ft – out of sight so it can watch activity below.

Hecher says there were hurdles to overcome in deploying the Camcopter to the region as it is not just a case of sending over the equipment – protocol and authorisations have to be in place – but the capability has so far been delivered on time.

“In normal airspace it would be far more difficult to get the authorisation to fly,” says Hans Georg Schiebel, chairman of the company. “It was a pleasure working with the OSCE, they are very professional.”

Meanwhile, in order to further potential usage of the Camcopter in commercial markets such as agriculture, the company is working to facilitate the integration of the system into unrestricted airspace.

The company envisages spending some €8 million ($10 million) to gain EASA certification for the UAV to fly in open European airspace.

“My vision is that there will be patches of airspace… where you can operate manned and unmanned aircraft in the same space,” Schiebel adds. “At some point we will see cargo planes without pilots.”