Social media giant Facebook has unveiled the completed prototype of a solar-powered unmanned aircraft designed to fly above 60,000ft for more than three months.

A Facebook-produced video released on 30 July shows the 42m (137ft)-wingspan Aquila aircraft as fully assembled in a building near Yeovil, UK. In an undated sequence, engineers are shown powering on the flying wing’s four electric motors, each driving a two-bladed propeller. 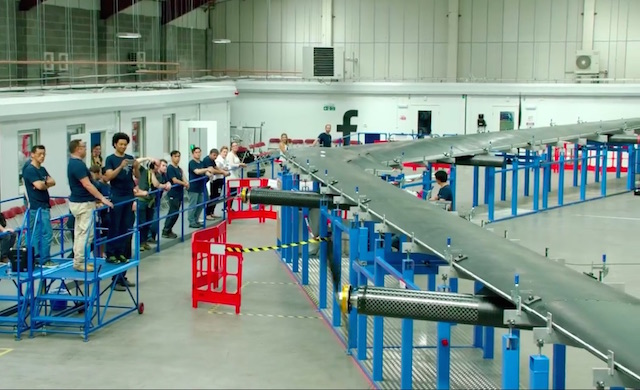 Last March, Facebook officials announced plans to complete first flight of the Aquila prototype this summer, then roll out improvements over the next several years.

The unveiling comes about 14 months after Facebook acquired the UK-based Ascenta consultancy founded by Andrew Cox, a veteran of the Qinetiq Zephyr project that set a record for long-endurance, powered flight in 2010.

Now engineering lead for the “Facebook aviation team”, Cox describes the process that led to the design of the Aquila’s broad wingspan.

“We’ve probably had a look at about five or six different sizes of aircraft. It got bigger every time,” he says. “I did have quite a nervous day one day when we decide to make it 42m. We had to check if the building was big enough.”

The entire top surface of the wing is composed of cells to collect solar energy, presumably to supply power to the electric motors. The structure of the aircraft is composed from T700 carbonfibre material, which Cox describes as three times stronger than steel and lighter than aluminium.

Facebook is sponsoring the Aquila project as part of a vision to provide Internet connectivity in parts of the world that lack practical access to terrestrial or satellite-based networks.

The concept includes a ground station that transmits a radio Internet signal to the Aquila mother ship, which then feeds a constellation of aircraft using lasers as transmitters.

In addition to unveiling the Aquila, Facebook also announced achieving a breakthrough in laser-based communications, with the ability to transmit at a rate of 10GB/s.

“If we get the aircraft to fly reliably, then we’re well on the road to begin able to deliver the internet to a lot of people,” Cox says.