Northrop Grumman plans to more than double production capacity for the RQ-4 Global Hawk and MQ-4C Triton unmanned air vehicles (UAVs) to 12 aircraft per year in anticipation of growing demand for the intelligence, surveillance and reconnaissance platform.

The manufacturer is adding production capacity to its Site 7 facilities in Palmdale, California. It will start production out of a recently remodeled building the week of 26 August, the company told FlightGlobal on a tour of the facilities on 20 August. The building is on the grounds of United States Air Force Plant 42 and was previously a manufacturing facility for the Northrop F-5 fighter.

The additional building is part of a larger revamp of production facilities for the RQ-4 and MQ-4C at Northrop Grumman’s Site 7 facilities. The company says all of its buildings on the site, totaling more than 32,516sq m (350,000sq ft), received modifications to improve production capacity and efficiency. 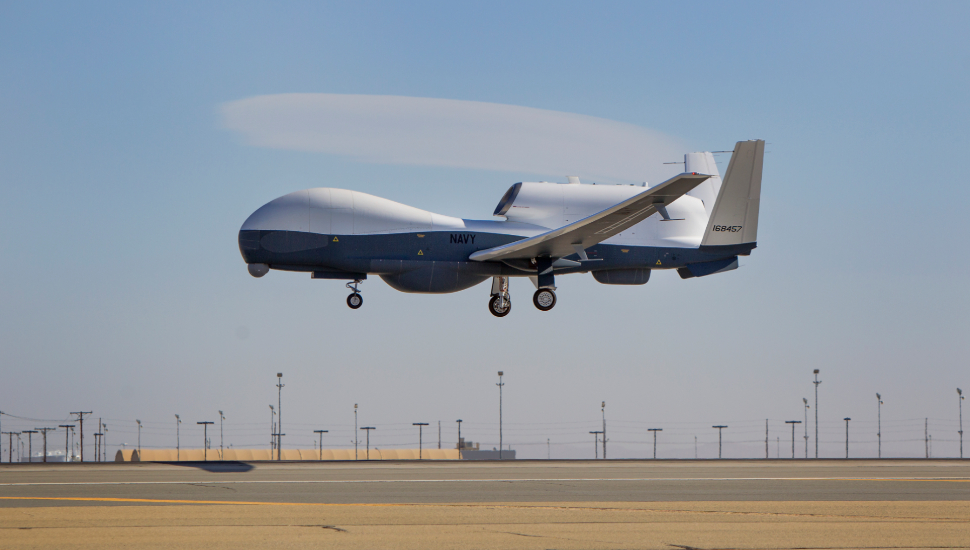 Northrop Grumman has lined up six customers for variants of its high altitude long endurance UAV: The US Navy (USN), US Air Force (USAF), NATO, South Korea, Japan and the Royal Australian Air Force. It declines to identify other prospective customers in its sales pipeline.

The USAF received the last of its fleet of 45 Global Hawks in March, says Northrop Grumman. No international customer has received the UAV yet, though South Korea and NATO are scheduled to take delivery before the end of 2019.

The USN programme of record is 70 MQ-4C Tritons, including two test aircraft. Northrop Grumman plans to retrofit some of the UAVs already delivered with signals intelligence (SIGINT) payloads, an enhancement that will allow the aircraft to take over electronic eavesdropping missions from the Lockheed EP-3. Going forward, new-build MQ-4C Tritons will also include the SIGINT payload.

The company previously produced between three to five RQ-4 Global Hawk or MQ-4C Triton aircraft per year. Typically it takes 12 to 14 months to complete final assembly of the UAVs in Palmdale, says the firm.

The additions and modifications to Site 7 are part of a larger investment in Palmdale’s capacity. Several other large buildings have gone up around Plant 42 in recent years for military programs that the company declines to discuss. The company also declines to say how much it has invested or how many additional personnel have been hired to work at the site.

“This is probably one of the largest single investments I’ve seen in 20 years,” says Doug Shaffer, vice -president and programme manager of the MQ-4C Triton.

Some of the facilities are to support production of the USAF’s top-secret B-21 Raider stealth bomber. Major General James Dawkins, who was visiting Northrop Grumman’s facilities for a B-2 Spirit bomber first flight anniversary on 20 August, said that the service is pleased with Northrop Grumman’s work on the B-21, which is scheduled to fly for the first time by December 2021.

“Everything I hear is that cost, schedule and performance is right on expectations,” he says.

Correction: Doug Shaffer’s title was changed to programme manager of the MQ-4C Triton. He does not manage the RQ-4 Global Hawk programme. The final assembly time was also clarified with new information from Northrop Grumman.

Update: The article was updated with additional information from Northrop Grumman on the company’s facilities investment, build pace and production schedule.