Switzerland has signed a production contract for the Elbit Systems Hermes 900 unmanned air vehicle following selection of the type in June 2014.

Worth $200 million, the contract award from the Swiss Federal Department of Defence, Civil Protection and Sport (DDPS) comes two months after the nation's parliament approved the purchase of six Hermes 900 UAVs – a vital precursor of any military deal in Switzerland.

It will replace the IAI/Ruag ADS 95 system, which is expected to be retired in 2020. Deliveries of the Hermes 900s are anticipated to be complete within four years.

“Switzerland is a very important market for Elbit Systems, and we are very proud of the DDPS’s decision to choose us as the supplier of the Hermes 900 HFE, a high-end and market-leading platform,” says Bezhalel Machlis, president and chief executive of Elbit Systems.

“The DDPS selection attests to our innovative and technological leadership in the area of UAS [unmanned air systems], supported by the maturity of our systems. We hope this project will pave the way for additional projects both in Switzerland and worldwide”. 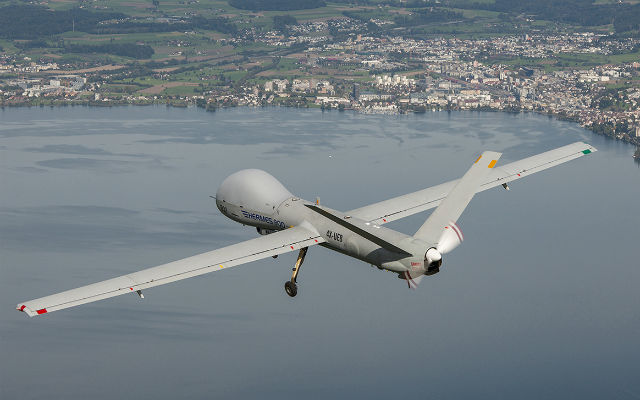 In November it was announced that the Israeli air force’s Hermes 900 fleet had reached full operational capability.

The UAV performed hundreds of operational missions during 2014’s Protective Edge campaign over the Gaza Strip, but was subsequently grounded as work continued to fully integrate it into the service's inventory.

Brazil also operates the type, having flown it for surveillance during the football world cup in 2014 alongside its Hermes 450 UAVs.