Two unmanned air vehicles have flown alongside a manned aircraft from a Spanish airport for the first time, under an Indra-led effort to demonstrate safe separation between the two types in controlled airspace.

Carried out at the Atlas experimental flight centre in Jaén, the testing involved two UAVs – one fixed-wing and one rotary – carrying out operations alongside Indra’s Tecnam P2006T-based MRI maritime surveillance aircraft (MSA) variant, under the guidance of the Single European Sky ATM Research (SESAR) initiative.

Although the focus is on the concept of manned and unmanned aircraft operating together in non-segregated airspace, segregated airspace at the Atlas centre was used for the testing. This involved two phases: the first with an Elimco E300 Viewer fixed-wing UAV carrying out a series of operations alongside the MSA, which was carrying out its own manoeuvres.

Operations were supervised throughout, “as you would do in a real situation”, with a controller providing separation instructions to the aircraft, Indra says.

“The drone’s remote pilot, [who] monitors the aircraft from the ground at all times, had the position data of both aircraft provided by an ADS-B receptor, thus improving situational awareness of traffic in the area,” said the company. 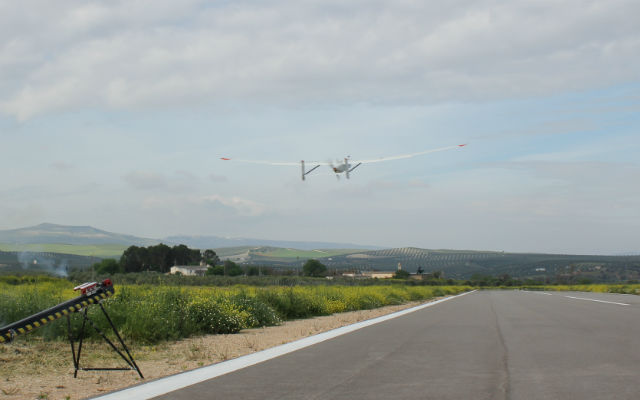 “The ability of these aircraft to operate at an airport under the same conditions was thus demonstrated,” Indra says.

SESAR, under its joint undertaking (JU) effort, is looking to overcome the challenges associated with operating UAVs in national airspace.

In April, it was announced Italy’s civil aviation authority, ENAC, had authorised the country’s CIRA aerospace research centre to test-fly an optionally-piloted variant of a Tecnam P92 Echo S light sport aircraft under the SESAR JU.

The one-year permit to fly allows for a 32-flight campaign by CIRA to assess the necessary technology on board its Flying Laboratory for Aeronautical Research optionally-piloted vehicle.

Additionally, the Thales Watchkeeper UAV operated by the British Army was also flown in controlled airspace in 2015 under the watch of the JU. Thales worked with UK ATM provider NATS and the Netherlands’ national aerospace laboratory, NLR, to show how unmanned systems can be operated alongside manned aircraft in controlled airspace.