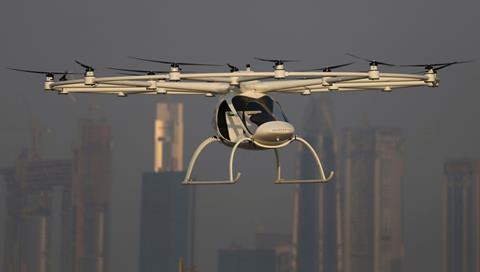 Chief executive Florian Reuter says the new shareholder structure brings “the expertise and necessary long-term funds on board to make this innovative form of mobility a reality”.

Volocopter claims to be unique among eVTOL developers in holding this EASA status. Other DOA holders include Airbus, BAE Systems, Leonardo and Lufthansa Technik.

Thewes says: “We are convinced that the Volocopter technology has the potential to bring transport logistics to the next dimension for our customers. DB Schenker has already tested autonomous and electrical vehicles in several innovation projects and in actual operations.

“By integrating the VoloDrone into our supply chain of the future we will be able to serve our clients’ demand for fast, remote, emission-neutral deliveries.”

VoloCopter says the latest funding will go towards the certification of the VoloCity and developing a second-generation VoloDrone for cargo operations.