The Avro RJ has bowed out of service with Swiss International Air Lines, 27 years after the four-engined jet made its Swiss debut with the airline's predecessor Crossair in BAe 146 form.

At the controls for today's special flight (LX7545) for media and guests was Swiss's Avro fleet chief Capt Michael Weisser, accompanied by his deputy Capt Peter Huber. After landing, the RJ100 (HB-IYZ) was given the traditional water-fountain salute by the fire brigade before being officially retired (below). 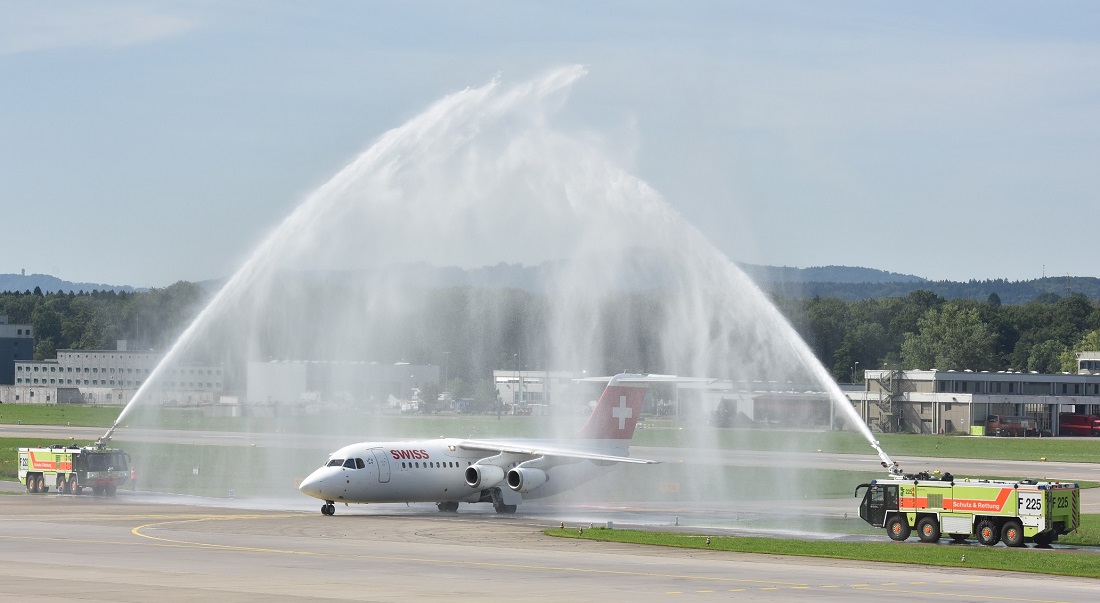 "Making this final landing at our home airport aboard an Avro was a very emotional experience for me," states Weisser. "The taking out of service of the Avro aircraft marks the end of an era in the history of aviation in Switzerland."

Swiss's Avro fleet has been progressively replaced over the last year by the Bombardier CSeries. Ten of the Canadian twinjets have now been delivered, and Swiss says that by the end of 2018, a further 20 are due to arrive.

The Avro RJ100 and smaller RJ85 have been the prime aircraft in the Swiss regional fleet since the company was founded in 2002. But the Swiss Avro connection extends back to the days of Crossair in the 1990s. 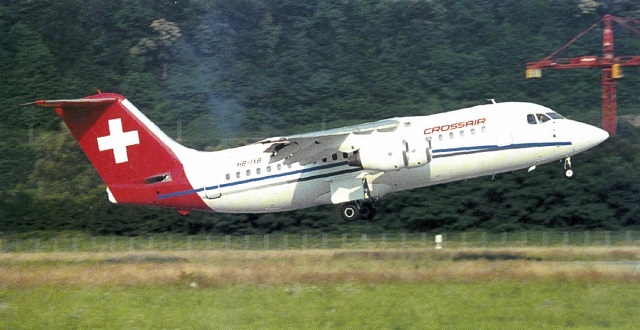 Flight Fleets Analyzer shows that Crossair acquired its first 146s – the Avro’s predecessors – in May 1990 through a lease deal with BAe Regional Aircraft for three ex-USAir aircraft. These aircraft (above), the first jets operated by the Swiss regional airline, were dubbed "Jumbolinos" and operated the first-ever jet service from London City in March 1992.

Crossair's first new Jumbolinos arrived in 1993 in the shape of Avro RJ85s, and it subsequently added the larger RJ100. One of these crashed on approach to Zurich in November 2001, with the loss of 24 lives.

By the time Crossair was succeeded by Swiss in 2002, 19 Avros were in service. The Avro fleet peaked at 24 units in 2006. The phase-out began during 2014 and by the start of this year eight remained in service. Swiss says it expects that the retired Avros will find homes with other airlines.