The Lockheed Martin F-35 Lightning II stealth fighter’s mission capability rate was hurt due to difficulty Lockheed Martin and its suppliers had producing spare parts, an issue caused by a three-year push to dramatically increase production of the aircraft, a top US Air Force official says.

The Lockheed Martin F-35 Lightning II stealth fighter’s mission capability rate was hurt due to difficulty Lockheed Martin and its suppliers had producing spare parts, an issue caused by a three-year push to dramatically increase production of the aircraft, a top US Air Force official says.

“The ramp that we've been through from production perspective — that affects not just Lockheed and how they process aircraft through their production line, but all of the lower-tier vendors as well that are now producing the parts at dramatically increasing rates,” says US Air Force Lieutenant General Eric Fick, the F-35 program executive officer, speaking at a press conference on 29 October. “And then they must also produce spares, even above those rates, right? And making that ramp, not just from a production perspective, but from a purchase of spares perspective, has been challenging.” 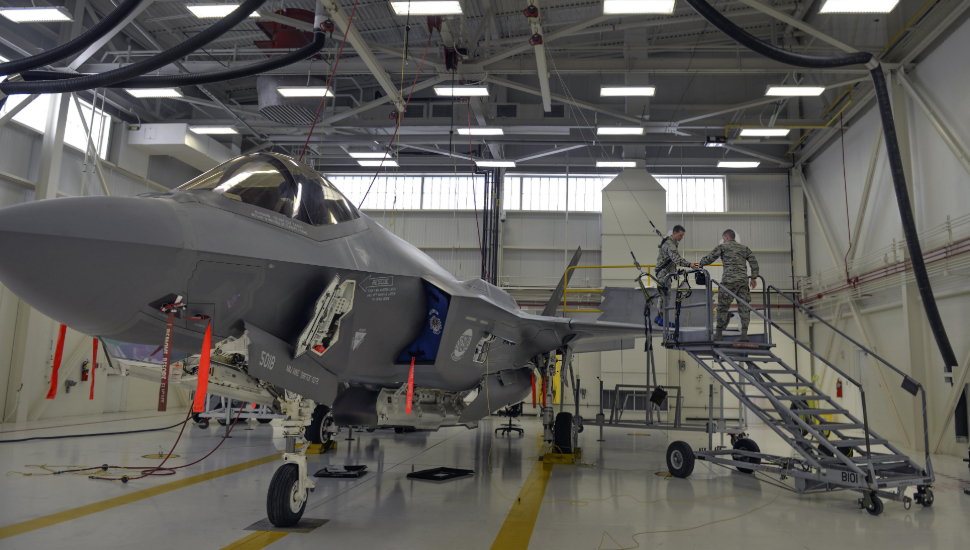 F-35A Lightning II for maintenance at Eglin Air Force Base

In particular, the F-35 programme was held back by problems with just a handful of parts.

“We are particularly having issues in three areas: one is canopies, two is engine fuel hydraulic tubes, and then wingtip lenses,” says Ellen Lord, undersecretary of defense for acquisition and sustainment.

“The issue with the canopies has to do with the loss of the coating that's applied to the outside of the canopy,” says Fick. “And, we're working to mitigate that with the prime contractor, Lockheed and their subs GKN [Aerospace] and PPG [Industries].”

Suppliers should be helped by a coming slowing of production increases, says Fick.

“The comparatively minor quantity changes across Lots 12 through 14 should give it some breathing room as we move forward,” he says.

Talk of production issues comes as Lockheed Martin and the F-35 Joint Program Office agreed on 29 October to a $34 billion production contract for 478 examples of the F-35.

The mega deal for the F-35 is not the multiyear contract Lockheed Martin wanted. Such a special agreement is signed with permission from the US Congress and gives manufacturers a cancellation payment if aircraft are not bought as promised. In return, Lockheed would then negotiate bulk discounts with its suppliers for parts and materials, passing back some savings to the Pentagon.

The Joint Program Office could not go forward with a multiyear contract because it has not completed Initial Operational Test and Evaluation (IOT&E) on the F-35 and thus hasn’t made a milestone C decision which would green-light the aircraft for official full-rate production.

IOT&E is delayed because the Joint Program Office disagreed with Lockheed Martin on how to build a combat simulator for the F-35 called the Joint Simulation Environment. The combat simulator will go through IOT&E likely starting in March and finish by July 2020, says Fick.

“The criteria in terms of getting out of IOT&E is to test against threats that we will see 10 years from now, in the densities we would see 10 years from now,” says Lord. “We can only do that in a synthetic environment. So we've completed over 90% of the testing. We are very confident in the configuration of the aircraft and we are just working on the nuances of working against these advanced threats.”