​The Kratos XQ-58A Valkyrie unmanned air vehicle (UAV) was damaged during landing after completing its third flight on 9 October in Yuma, Arizona.

The Kratos XQ-58A Valkyrie unmanned air vehicle (UAV) was damaged during landing after completing its third flight on 9 October in Yuma, Arizona.

The issue was caused by a malfunction of the aircraft’s provisional flight test recovery system and high surface winds, says the Air Force Research Laboratory (AFRL) in a media release on 10 October. The UAV was being tested as part of the AFRL’s Low Cost Attritable Strike Demonstration programme when the incident occurred.

The XQ-58A parachute-lands on its belly using an airbag cushion system that deploys from within the airframe. It is not clear what went wrong with that system. 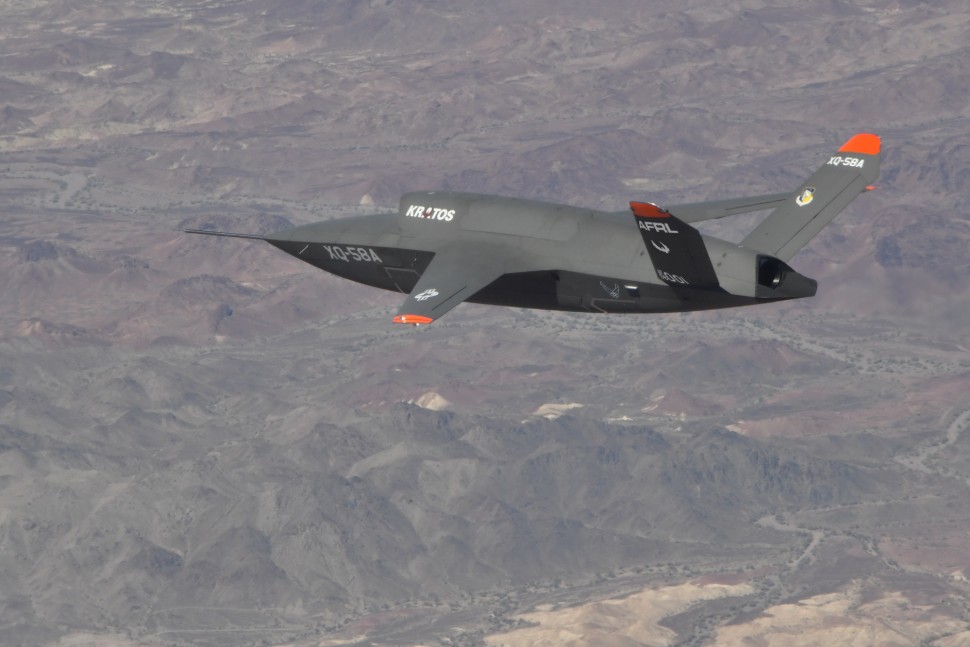 “In final descent, the prototype cushion system, which was employed for the initial test series but is not intended for ultimate operational use, suffered an anomaly resulting in the aircraft sustaining damage upon touchdown,” Kratos says in a media release. “The XQ-58A Valkyrie, like all Kratos’ heritage drones and Kratos’ high performance jet target drones, are designed to be quickly repaired and reused if damage is sustained after performing operational missions. The Valkyrie has been recovered, and the damage has been initially evaluated and determined to be fully repairable.

Kratos says it plans to address the cushion system prior to the UAV’s scheduled fourth flight. That next flight of the aircraft is delayed until the conclusion of a safety investigation, AFRL says. There was no other damage to property or personnel, says the laboratory.

“The reliability of the cushion system is an area we must improve, and we’ll be working with our subcontractor to perfect the system before flight four,” says Steve Fendley, president of Kratos unmanned systems division. “However, this is specifically why flight test series are performed: to address any issues ahead of full operational capability being achieved and ensure our Armed Forces are using the most reliable technologies available.”

The XQ-58A met all of its 56 baseline test points, plus two additional test points with excess fuel remaining at the conclusion of its 90min flight, expanding the UAV’s performance envelope to higher speeds and altitudes before the incident occurred, says Kratos and AFRL. The speed and altitude achieved during the third flight test were not disclosed by the laboratory or UAV manufacturer. The UAV now has about 270min of air time over the course of three flights since its inaugural flight in March 2019.

“We continue to learn about this aircraft and the potential the technology can offer to the warfighter. This third flight successfully completed its objectives and expanded the envelope from the first two flights,” says Major General William Cooley, commander of AFRL. “We have gathered a great deal of valuable data from the flight and will even learn from this mishap. Ultimately, that is the objective of any experiment and we’re pleased with the progress of the Low Cost Attritable Strike Demonstration programme.”

In addition to the AFRL-owned XQ-58A that was damaged, Kratos owns two other flyable examples of the UAV which it might substitute for the Low Cost Attritable Strike Demonstration programme.