Manila to return 7 UH-1s to service with Japanese spares

The Philippine Air Force will use spare parts donated by Japan to help return seven UH-1 utility helicopters to service.

The Philippine Air Force will use spare parts donated by Japan to help return seven UH-1 utility helicopters to service.

According to an air force statement carried by the official Philippine News Agency, a team of air force personnel “found several items needed for restoring seven of the helicopters [to] operational status.” 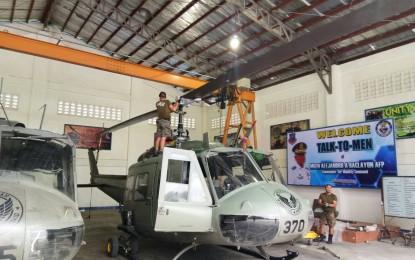 "The restoration and maintenance of UH-1 aircraft are vital in performing missions such as humanitarian assistance and disaster response, transport, intelligence, surveillance, and reconnaissance activity of the PAF," says air force spokesman Aristides Galang.

In addition, Japanese-provided spares will make their way into the active fleet.

Cirium fleets data suggests that Manila has 18 UH-1s in service, of which 14 are UH-1Hs and four are upgraded UH-1H Huey IIs, which feature a more powerful version of the Honeywell T53 engine and other improvements. The average age of this fleet is 47.5 years.

In addition, 89 UH-1Hs are shown as being retired.

The Japan Ground Self-Defense Force operates 130 Suburu-built UH-1J’s. The Japanese company is developing the UH-X as a replacement for the UH-1J.