​The US Senate confirmed Barbara Barrett as the 25th Secretary of the Air Force.

The US Senate confirmed Barbara Barrett as the 25th secretary of the US Air Force (USAF).

She was confirmed in an 85 to 7 vote on 16 October. Barrett replaces Heather Wilson who resigned in May to become the president of the University of Texas at El Paso.

Barrett will become the third consecutive woman confirmed to lead the USAF. 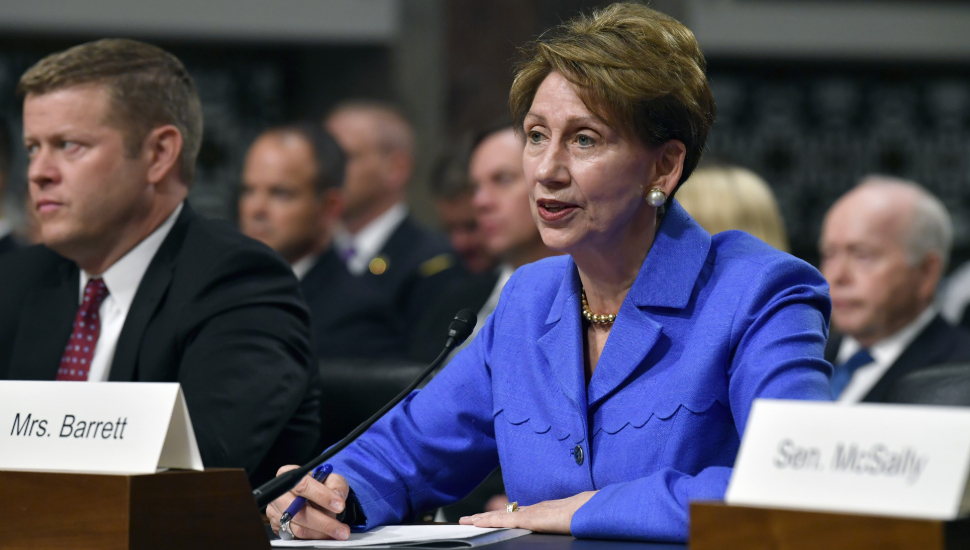 Barrett has a wealth of space-related experience. During her US Senate confirmation hearings she endorsed creating a Space Force as the new and separate sixth branch of the US military.

“If confirmed, standing up a Space Force would be a key imperative,” she said in September at her hearing. “I believe we need the Space Force, in fact, in my opinion, a domain-specific service to organise, train and equip space forces is overdue.”

The Pentagon’s interest in creating a Space Force branch has been brewing for years as adversaries of the USA, especially China and Russia, have moved military weapons and new types of intelligence, surveillance and reconnaissance vehicles into space. Space-related technologies and operations are currently spread among the US military branches. It is hoped a Space Force could consolidate a large portion of that responsibility, enabling the USA to more effectively defend itself.

Perhaps foremost among Barrett’s space-related experience, is her role as the chairman of the Aerospace Corporation from December 2013 to December 2017. The El Segundo, California-based federally funded research and development center focuses exclusively on space technologies.

Barrett’s space technology experience also includes service on the governing boards of RAND Corporation, the Smithsonian Institution and NASA’s Jet Propulsion Laboratory. She is also a Life Director of the Space Foundation, a nonprofit that advocates for space education.

She also has served in various government roles over the decades, including time as the ambassador to Finland between 2008 and 2009. She was a deputy administrator with the Federal Aviation Administration between 1987 and 1988. Barrett is also an instrument-rated pilot.

In August, the Pentagon re-established US Space Command, which has been defunct since 2002, as a combatant command under a general to streamline military space operations as a possible step toward establishing a Space Force.