The TEDBF will be developed to replace the Indian navy’s RAC MiG-29Ks, and will differ radically from the AMCA being developed for the nation’s air force. 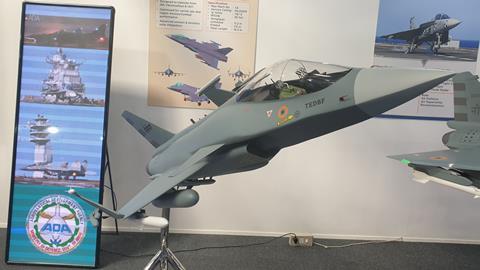 Optimised for carrier operations, the TEDBF will feature a conventional delta wing configuration with canards and a horizontal tail, whereas AMCA has a twin-tail layout with an emphasis on stealth.

The TEDBF will operate from the navy’s short take-off but assisted recovery carriers INS Vikramaditya and IAC 1: Indigenous Aircraft Carrier 1, which will start sea trials this year and be named INS Vikrant.

Outfitted with folding wings for deck handling and storage, the TEDBF will have a maximum take-off weight of 26t and be powered by two GE Aviation F414 INS6 engines.

The navy fighter will forgo an internal weapons bay. Instead it will have wingtip rails, six under-wing hardpoints, two fuselage hardpoints, and one centreline pylon.

The AMCA, for its part, is expected to roll out in 2023-2024, with first flight slated a year later. The programme received a formal go-ahead in December 2018 and the preliminary design review is almost complete. Airbus Defence & Space is providing design assistance. 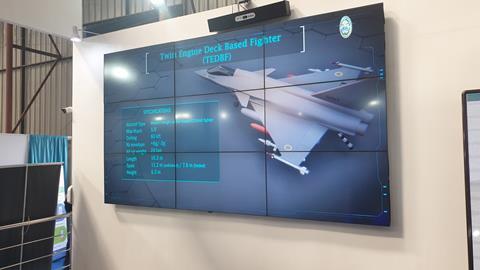 “Stealth shaping has been done, with an enormous amount of work on the serpentine intake for the last 7-8 years on all these aspects and they have been mastered,” says an ADA official close to the programme.

“We have a big stealth programme in the country and the stealth materials for AMCA have already been frozen.”

The air force wants a 24,700lb (110kN)-class engine for the twin-engined AMCA, but initial prototypes will fly with a proven 20,000lb-class engine. The more powerful engine is slated for installation from the fourth prototype onwards. GE, Eurojet and Rolls-Royce have offered solutions for the AMCA powerplant via the government-to-government route.

The AMCA programme commenced in October 2010, when feasibility studies for a fifth-generation air force fighter were initiated. The air force issued the Draft Preliminary Services Qualitative Requirement for AMCA in September 2014.