The airframer on 12 April released images of the 737NG’s fuselage, shortly after its arrival by rail from Spirit AeroSystems’ Wichita plant in Kansas. Following the completion of assembly work, the aircraft will be transferred to Boeing Defense, Space & Security for mission system installation work, before its delivery to Norway before year-end. 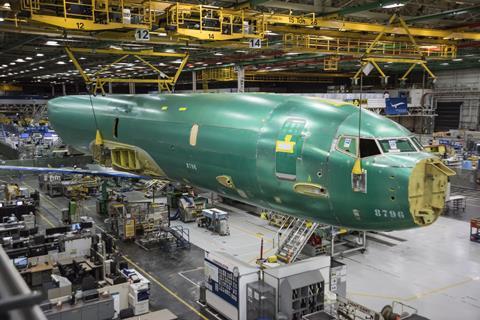 Oslo in January 2019 ordered the Poseidons as replacements for the Royal Norwegian Air Force’s active fleet of six Lockheed P-3C Orions and two special-mission Dassault Falcon 20s. Boeing says the NATO nation’s new assets “will provide advanced capabilities to maintain situational awareness in neighbouring waters on and below the surface of the ocean”.

Cirium fleets data shows that there are 134 P-8s in current active service with lead operator the US Navy (108) and international customers Australia (12), India (9) and the UK (5).