Boeing haemorrhaged cash in the third quarter of 2022, posting $3.3 billion in losses primarily in the company’s defence business.

Executives said on a 25 October earnings call that five development programmes, all bid with a risky fixed-price strategy, drove the losses by racking up $2.8 billion in charges for delays and cost overruns. 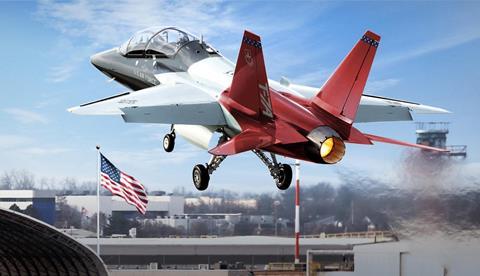 However, chief executive David Calhoun struck an optimistic tone in the face of the grim performance.

“We believe that the charge we took is to complete those contracts,” Calhoun says. “We’re not embarrassed by them. They are what they are, and we intend to deliver on these contracts and satisfy our customers.”

The aircraft generating such losses are some of the company’s most significant defence contract awards in recent years, including the KC-46 aerial refueller, T-7A jet trainer, MQ-25 carrier-based autonomous refueller and the new 747-derived Air Force One presidential aircraft, known as the VC-25B.

By contrast, Boeing’s legacy defence programmes, such as the AH-64 Apache attack helicopter and F/A-18 Super Hornet fighter, generated modest profits or at least broke even during the quarter.

The third-quarter losses continue a downward trend this year for Boeing’s defence business, which saw a $1.5 billion profit in 2021. The issues stem from how the loss-generating contracts were bid years ago under previous company leadership.

BOUGHT AT A PRICE

Boeing employed what is known a firm, fixed-price (FFP) strategy – a risky approach that guarantees timely delivery and that the customer will not pay more than the promised price.

While FFP bids might let contractors offer more-competitive bottom lines, they are inherently uncertain, leaving companies on the hook to deliver as agreed, even if material and labour costs surge.

Delays, whether due to production constraints or engineering hurdles, also leave suppliers subject to penalties.

In June, the Pentagon released new guidance for its contracting officers in an attempt to limit the damage to military suppliers as inflation surged. But the guidance notes that FFP contracts are generally not subject to adjustment for inflation.

Boeing opted for the FFP strategy after losing bids on several major defence development contracts, including the F-35 fighter to Lockheed Martin and the next-generation B-21 strategic bomber to Northrop Grumman.

The approach secured Boeing wins on several new programmes. But the company, like others, faced massive disruptions in the supply of labour and components during the Covid-19 pandemic. Those issues are ongoing.

Aboulafia says Boeing’s bets may yet pay off, but if so, likely not for decades. Meantime, Boeing’s financial strength will hinge on whether its flagging commercial business can regain profitability following the 737 Max disasters and pandemic drop in air travel.

Boeing executives are not shying from trouble in the defence world, saying their short-term goal is to right the ship.

“Our mandate is to stabilise and deliver a very important product to our customers,” says chief financial officer Brian West.

That involves moderating expectations on Wall Street. Calhoun and West caution they do not expect labour and supply challenges, which are driving the FFP defence losses, to abate soon.

“We’re trying to assess these programmes with real clarity and realism, with respect to what we’re experiencing now,” says Calhoun. “[We are] not projecting a significant improvement in the future.”

He notes much of Boeing’s defence workforce must complete lengthy and expensive security clearance reviews with the US government, which, along with supply shortages, has created serious production bottlenecks.

HOPE FOR THE FUTURE

Despite the arguably bleak outlook, Calhoun and West insist the loss-generating development programmes will ultimately provide revenue for decades.

“These programmes… will be key to margin recovery in future periods”, notes Calhoun, adding that “current performance doesn’t reflect where we’d like to be”.

Although the losses are substantial, so too is demand for Boeing’s military aircraft. Calhoun says the company received $5 billion in new orders during the recent quarter, adding to a total defence backlog of $55 billion.

Also, after a year of open hostilities in Europe and growing militarism in Asia, Boeing sees strong support in Washington for increased defence spending, with a similar trend in other Western Bloc capitals.