Turkey has taken receipt of its 10th and final A400M from Airbus Defence & Space, becoming the third nation to complete its fleet of the tactical transports.

Europe’s OCCAR defence procurement agency says the Turkish air force’s last Atlas, production aircraft MSN118, was handed over on 29 March. It adds that this is the first A400M to have been completed in the Batch 7 configuration: “the final standard to be manufactured at the final assembly line in Seville, [Spain]”. 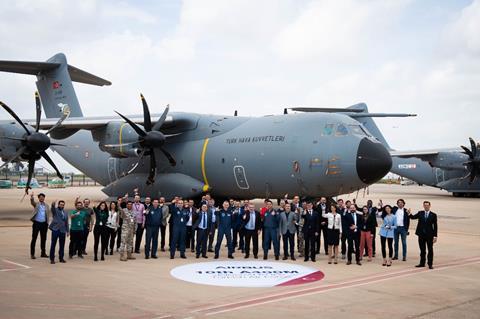 OCCAR notes that the head of the Turkish delegation responsible for accepting the transport “paid tribute to the crew of MSN23, tragically lost during its first flight”. Produced for the Turkish air force, that aircraft crashed close to San Pablo airport in Seville on 9 May 2015, killing four Airbus flight-test personnel.

MSN118 is the first of a planned nine A400Ms to be handed over to customers this year, OCCAR says.

Deliveries continue for the air forces of Belgium, France, Germany, Spain and the UK, with Indonesia and Kazakhstan also to be future operators of the type.

Malaysia operates a four-strong Atlas fleet, with its airlifters recently having passed a combined 10,000 operating hours. “With more flight hours and flight cycles than other operators, the Royal Malaysian Air Force is recognised as the A400M’s global fleet leader,” Airbus Defence & Space notes.

Luxembourg last year introduced its lone example of the type, which is operated in conjunction with the Belgian air force.