The US Air Force (USAF) plans to award a sole source contract to Collins Aerospace to deliver 3,018 examples of its ACES 5 ejection seats for installation in the service’s fleet of Boeing F-15, Lockheed Martin F-16, Lockheed Martin F-22, Boeing A-10 and Boeing B-1Bs.

The US Air Force (USAF) plans to award a sole source contract to Collins Aerospace to deliver 3,018 examples of its ACES 5 ejection seats for installation in the service’s fleet of Boeing F-15, Lockheed Martin F-16, Lockheed Martin F-22, Boeing A-10 and Boeing B-1Bs.

The Next Generation Ejection Seat contract has been valued by Collins as worth hundreds of millions of dollars, though the USAF blacked out the contract ceiling award in a redacted Justification and Approval (J&A) notice it posted online on 2 October. The J&A was signed off by the service’s head of acquisition, Will Roper, assistant secretary of the USAF for acquisitions, technology and logistics, on 26 September.

Collins Aerospace acknowledges the award in a statement, but declines to say the value of the contract.

"Collins Aerospace is proud to support the US Air Force and the warfighter with our ACES 5 ejection seat," the company says. "We were recently notified of the publication of a pre-solicitation Justification and Approval for a sole-source contract to Collins Aerospace for the Next Generation Ejection Seat programme."

The leading alternative to Collins Aerospace’s ACES 5 ejection seat was Martin-Baker’s Mk16 ejection seat, which is used on all variants of the Lockheed Martin F-35 Lightening II. 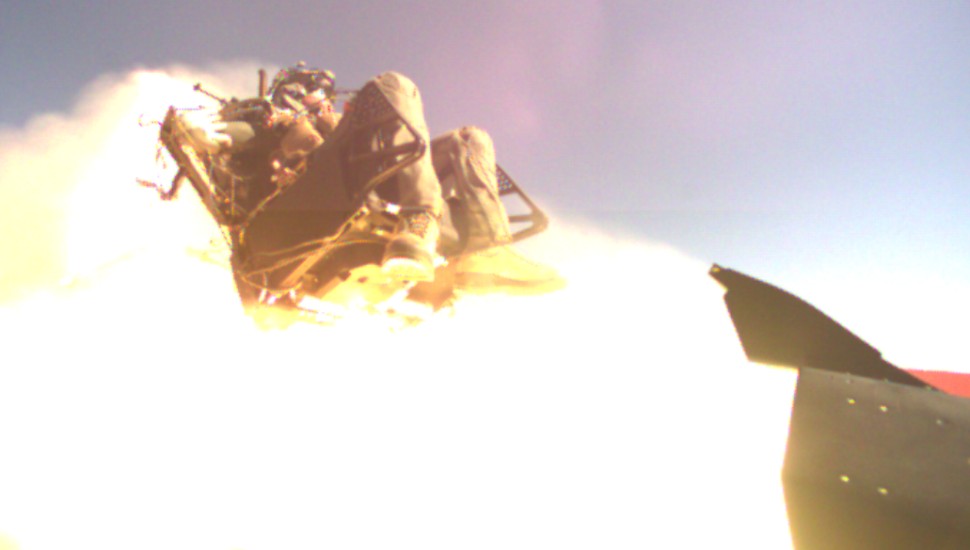 However, the USAF decided that Collins Aerospace’s ACES 5 was the only ejection seat technologically mature enough to quickly be installed in its thousands of combat aircraft.

“Moreover, award to any other source would result in an unacceptable delay of at least 26 months, putting the lives and safety of aircrew at unnecessary risk of major injury or fatality during a high speed ejection,” the service says in its notice.

The USAF says it is keen to quickly field a new ejection seat as the current seat used on its fleet, the Collins Aerospace ACES II, which was initially fielded in 1978, is dangerously outdated.

In particular, the addition of helmet-mounted heads-up displays and night vision goggles to combat pilots’ gear has made ejecting riskier. During ejection, those devices can catch the windstream and whiplash pilots, causing neck and head injuries, or even death. In response, the air force wants additional head restraints. Leg and arm restraints are wanted also to prevent flailing and possible limb injury during ejection.

The J&A says one other company submitted a bid for the Next Generation Ejection Seat programme, though that firm’s name has been redacted. Presumably, the other source was Martin-Baker. The company did not immediately respond to a request for comment.

The 26mo fielding delay of the second source’s ejection seat would be caused by additional time needed to develop the ejection seat and qualify its airworthiness through a string of 22 sled tests, says the USAF. Collins Aerospace has been testing its ACES 5 over the past several years, so it only needs eight more sled tests, the notice says.

Sled tests involve using a rocket cluster to push a sawed-off cockpit equipped with an ejection seat down a rail line. During the sled test, which can approach supersonic speeds, a dummy pilot is ejected from the cockpit and an encirclement of high-speed cameras captures the ejection so that engineers can study it later, ensuring that a real-life pilot would not sustain major injuries in the process.

Collins Aerospace supplies a version of the ACES 5 for the Northrop Grumman B-2 stealth bomber. It also will supply the ejection seat for the Boeing T-7A trainer.

Update: This article was changed to include Collins Aerospace's statement.